“THE EYE of the Airman sees all—even the private terraces, lawns and walks in the secluded gardens of the King’s Palace.” This is true today, albeit from some altitude, for anyone approaching Heathrow Airport from the east over the city of London. It was an especially privileged view when the airport was Croydon Aerodrome and the year was 1930.

London from aloft: a pictorial survey of the British capital city from a new angle, Gordon Hotels Limited, 1930.

London from Aloft served two purposes for its readers 85 years ago, and continues to delight today. Its first 47 pages offer aerial views of London, “A Pictorial Survey of the British Capital City from a New Angle.” Historic London is all there, with nary a skyscraper in sight. The book’s second half, especially charming to my eye, is devoted to four of London’s finest hotels of the era, the Gordon Hotel chain’s May Fair, Metropole, Grosvenor and Victoria. These first three continue today as luxury hotels; the fourth is now 8 Northumberland Avenue, an upmarket venue.

This and other images from London from Aloft.

The book’s ads are a delight too. This was English society at the close of the Roaring Twenties, with elegant men and women yet to experience a Great Depression or a second world conflict.

The Houses of Parliament.

This particular view of the Houses of Parliament, Westminster Abbey, Big Ben and Westminster Bridge has changed very little since 1930. Pull back a little today, and a giant Ferris wheel would be seen in the upper left corner of the shot. Who would have imagined in 1930 that something officially known as the Coca-Cola London Eye would be there?

London Bridge, known to be “falling down.”

There has been a London bridge since Roman times, followed by a medieval structure that lasted for 600 years, then the London Bridge shown here built in 1831. By the way, the white spire in this photo’s upper left corner is The Monument. It stands near the spot in Pudding Lane where the Great Fire destroying the medieval portion of London started on September 2, 1666.

From the 1600s, kids sang “London Bridge is Falling Down,” and, indeed, by the late 1920s, this particular structure was in trouble, one side having sunk several inches lower than the other.

The city soldiered on until 1967, when London Bridge was sold to American entrepreneur Robert P. McCulloch for $2,460,000 (perhaps $17.6 million in today’s dollar). London Bridge was relocated to Lake Havasu City, Arizona, rededicated in 1971 and is a regular photo op there today.

The May Fair Hotel.

“The May Fair Hotel,” writes Gordon Hotels Managing Director Sir Francis Towle, C.B.E., “stands in the heart of fashionable London. Round it lie the streets of Mayfair, … its windows overlook the historic town house of the Marquis of Lansdowne. There is no finer site in the West-end of London.”

My May Fair registration.

Indeed, I had the pleasure of experiencing the May Fair in 1988. I recall one of its niceties being a little leather case of visiting cards printed with simply Dennis Simanaitis, The May Fair, London. Needless to say, everything else there was equally top-drawer. 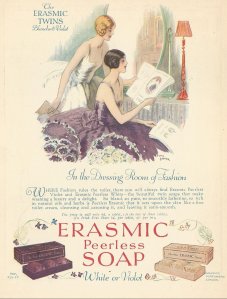 I’ve forgotten the hotel toiletries, but they might well have been Erasmic Peerless.

My air transportation was through Heathrow, but back in 1930 one flew out of South London’s Croydon Aerodrome. Travelers could avail themselves of Air Union, in centrally located Haymarket, for all manner of services.

Of course, flying wasn’t the only way to visit the Continent and beyond. The Orient Express connected London and Paris by boat train, from which travel as far as Athens or Istanbul could be had.

Or, one could travel by motor car.

Were I to choose a motor car, I’d surely use Redline Super Petrol. Wouldn’t you?