FROM TIME to time, people tell me that mathematicians are a humorless lot. This, despite my having a tee-shirt (I’m wearing it at the moment) that says “Another day with no plan to use calculus.”

As counterexamples to the Humorless Mathematician Postulate, I offer two others, Tom Lehrer and the late Howard Eves (in addition to my immodest self, of course). 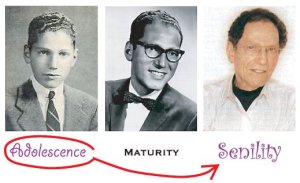 Tom Lehrer, satirist extraordinaire, taught mathematics at the University of California, Santa Cruz. Though he retired in 2001, he still hangs out there; Lehrer is an irrepressible 87.

As a gauge of his intellect, Lehrer claims he invented the Jell-O Shot. He was in the U.S. Army at the time, assigned to the National Security Agency. Later, Tom began his UC, Santa Cruz, career teaching mathematics for liberal arts majors. “Math for Tenors,” he called it.

Lehrer’s mathematical wisdom has already appeared at this website in “Common Core Math.” If you’re into political aspects of this, write him, not me.

Howard Eves, rest his soul, wrote a lot of serious mathematics, Functions of a Complex Variable and the like. However, he’s best known for a series of books growing out of his informal coffee house talks during his teaching career at the University of Maine, 1954 to 1976. There are six altogether, In Mathematical Circles: A Selection of Mathematical Stories and Anecdotes: Quadrants I, II, III, and IV (Mathematical Association of America),

The Eves collection of mathematical stories and anecdotes.

Eves’ books collect favorite tales, some several to a page, others longer, arranged loosely into a wide range of categories. Some of the chapters, randomly from the six volumes, include The Animal World, Real and Imaginary; Geometry; Women of Mathematics; Nicolas Bourbaki; and Some Logical and Some Illogical Moments.

Whereas Lehrer’s outrageous humor occasionally soars to the absurd (e.g., his lilting ballad “Poisoning Pigeons in the Park”), Eves’ wit is subtle. A goodly number of his tales are mathematically instructive; others are just fun.

On endangered snakes: Adders were in danger of extinction until a herpetologist/mathematician gave the snakes tables made of cut timber. The species is off the endangered list now, because log tables make it possible for adders to multiply.

Concerning a particular geometry text: A soldier carried the book in his breast pocket through the war, and it saved his life. A bullet ricocheted off his ribs, but it was unable to get beyond the problems at the end of the first section.

On the witch of Agnesi: Maria Gaetana Agnesi was an Italian polymath who, at an early age, learned Latin, Greek, Hebrew, French, Spanish and German, among other languages and mathematics. When she was nine, Agnesi published a Latin discourse defending higher education for women.

“The Witch of Agnesi,” a curve originally named otherwise, but misrendered by Maria Agnesi and her translator.

A particular cubic curve is identified with Agnesi through a misunderstanding and translation. According to Eves (other opinions differ), an earlier author may have called the curve a versoria (Italian for a rope guiding a sail) or versorio (implying a freedom of movement). In her classic two-volume work on analytic geometry, Agnesi call it a versiera, Latin for a female goblin. Her English translator rendered the curve “the Witch of Agnesi.” In other languages, it’s simply Agnesi’s curve.

The matter lay dormant until the 1947 Year Book of the Encyclopedia Britannica published an item blowing Bourbaki’s cover written by Ralph P. Boas, then executive editor of Mathematical Reviews, a prestigious American journal. Bourbaki responded with a hurt letter countering alleged non-existence. Better yet was a rumor, no doubt started by Boubaki: “Boas is the collective pseudonym of a group of American mathematicians who act jointly as the editor of Mathematical Reviews.”

An academic observation offered by Eves: The dean quit his job and became a senator, thereby raising the average IQ of both the university and the Senate.

Eves on logic: A boy is dolefully practicing his piano lesson when a salesman knocks on the door. “Is your mother home?”

The kid says, “What do you think?” ds