But Science magazine, published weekly by the American Association for the Advancement of Science, has already voted in favor of an M.E. What a fabulous job in engineering the genus Hippocampus, the seahorse! 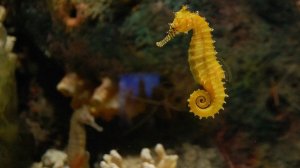 A seahorse, genus Hippocampus. This and other images from “Curiously Square Seahorse Tail Could Inspire Engineering Advances,” by Meagan Phelan, Science website, July 3, 2015.

The seahorse’s Hippocampus comes from the Greek hippos, horse, and kampos, sea monster. This sea creature is known for its head and neck suggesting a horse, its segmented body armor with numerous projections and its prehensile tail curled in logarithmic pattern. There are 47 species of seahorse, a new one discovered as recently as 2008. These range in size from pine nuts to bananas and reside in northern waters to the tropics.

Perhaps less familiar are seahorse means of reproduction. Together with its pipefish relatives, seahorses are one of few animals with male pregnancy. He has a pouch into which the female deposits her eggs. He fertilizes, gestates and releases the offspring into the sea.

Like turtles, lobsters and lots of insects, seahorses carry an exoskeleton, an external structure of bony plates fused with fleshy links. In the July 3, 2015, Science magazine, two articles and a website item focus on the seahorse’s prehensile tail, its use in gripping sea grass, in courting and in survival from predators. Unlike most appendages, but shared with its pipefish relatives, the seahorse’s tail is square in cross section, not circular. Why ever is this?

In “Why the seahorse tail is square,” researchers Michael M. Porter, Department of Mechanical Engineering, Clemson University, Clemson, South Carolina, and colleagues offer anatomical and engineering analyses of square-tail benefits. A seahorse’s tail consists of a bony armor arranged into several ringlike segments composed by four L-shaped plates that surround a central vertebra. The researchers note, “These plates articulate with specialized joints that facilitate bending and twisting, as well as resist vertebral fracture from crushing.”

Engineering designs answer biological questions. These and other images from “Why the seahorse tail is square,” by Michael M. Porter et al, Science, July 3, 2015.

To study this, the researchers constructed 3D-printed analogs of square and circular tail structures. Their tests confirmed that the square configuration displayed better behavior in bending, twisting and compression. The researchers identified three modes of joint articulation, ball-and-socket, peg-and-socket and sliding.

They conclude “Understanding the role of mechanics in these prototypes may help engineers to develop future seahorse-inspired technologies that mimic the prehensile and armored functions of the natural appendage for a variety of applications in robotics, defense systems, or biomedicine.” A Porter video describes potential benefits (it’s a Russian link, but the video is in English).

In an accompanying Science article, “When it’s hip to be square,” Miriam A. Ashley-Ross reports on the research of Porter and his colleagues and related work. For example, she describes the contrasting resistance of compressing a square-section tail versus one of circular section.

Consequence of shape when compressing arrays of rings. Image from “When it’s hip to be square,” by Miriam A. Ashley-Ross, Science, July 3, 2015.

“This difference,” notes Ashley-Ross, “appears to result from the ability of its overlapping plates to linearly slide over one another, which does not alter the shape of the structure. In contrast, when the round tail was compressed, no such linear sliding is possible … rather, the plates are forced out of register with one another.” For biomimic applications, she observes that the seahorse’s combination of mechanical strength with flexibility is attractive.

Ross Hatton, College of Engineering, Oregon State University, Corvallis, Oregon, is one of Porter’s colleagues in the study. He sums up the seahorse’s engineering elegance: “Human engineers tend to build things that are stiff so they can be controlled easily. But nature makes things just strong enough not to break, and then flexible enough to do a wide range of tasks… We can learn a lot from animals that will inspire the next generation of robots.” ds

This entry was posted on July 24, 2015 by simanaitissays in Sci-Tech and tagged "Curiously Square Seahorse Tail Could Inspire Engineering Advances" by Meagan Phelan, "When it's hip to be square" by Miriam Ashley-Ross, "Why the seahorse tail is square" by Michael M. Porter et al, AAAS Science magazine, seahorse engineering.