THE TALE of our Uncle Sam is oft-told, but not completely inappropriate on this, the 239th anniversary of the signing of the U.S. Declaration of Independence. Uncle Sam is a national symbol, after all, right up there with the American Eagle and Plymouth Rock. Like these other two, his place in U.S. history is at best anachronistic, and possibly apocryphal. He’s entertaining to research, though. 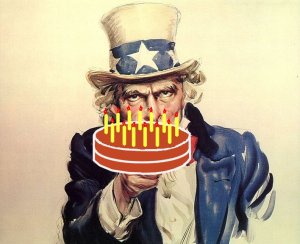 The familiar tale dates from the War of 1812, sorta Revolutionary War 2.0. Samuel Wilson was a meat packer in Troy, New York, who supplied U.S. troops with rations marked U.S. Was this to differentiate them from Canadian imports, back in the day when American cars didn’t all come from there or Mexico? 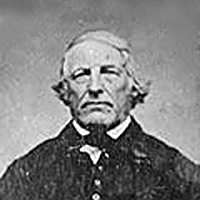 Samuel Wilson. 1766 – 1854, American entrepreneur of bricks, beef and pork. To learn of some descendants, see “Plenty Will Claim to Be Uncle Sam, but a Few Can Prove the Lineage,” by Sam Roberts, The New York Times, July 3, 2015.

Actually, it was more than simply avoiding Canadian imports. A fellow named Elbert Anderson, Jr., had a contract to supply U.S. soldiers with meat. Sam Wilson was appointed meat inspector. And, required by law, each barrel was actually marked E.A.―U.S. for Elbert Anderson, Jr., and the United States.

Sam was known as a friendly sort, however, and soldiers thanked their Uncle Sam for the grub out of these barrels. Along came an 1816 book, The Adventures of Uncle Sam, in Search After His Lost Honor, by Frederick Augustus Fidfaddy, Esq. And, like anything on the Internet today, having appeared in print the story became fact.

Quite the talented guy, Nast also gave us the modern image of Santa Claus and the donkey and elephant political symbols, important before newspapers printed blue and red, respectively.

During World War I, artist James Montgomery Flagg, 1877 – 1960, offered Uncle Sam pointing YOU into the U.S. Army. The illustration’s initial appearance, on the cover of Leslie’s Weekly in July 1916, was accompanied by the rather lame “What Are You Doing for Preparedness?” Not nearly as catchy, eh?

Flagg’s WWI recruitment poster was inspired by an earlier British one showing Lord Kitchener in a similar pose. Flagg continued producing patriotic posters into World War II. One appearing between VE and VJ days shows Uncle Sam rolling up his sleeves and saying, “We’ll Finish the Job! Jap, You’re Next!” Other Flagg renderings of Uncle Sam were rather less belligerent, for example, one encouraging kids to buy WWI War Saving Stamps.

More recently, Uncle Sam got another rendering entirely in what many (certainly I) consider the best comedy album of all time, Stan Freberg Presents the United States of America.

“The heck you say!” responds Washington.

He’s told, “We’ve got to hustle America like any other product, a bar of soap, a box of snuff.” Their proposal includes an athlete endorsement, Uncle Irvine in red shorts and a blue undershirt.

Instead, Washington introduces his Uncle Sam. “I want you…” begins Uncle Sam. “Don’t point your finger,” says his nephew, “It’s not polite.” However, the folks at MJF&O recognize a good “image answerwise and answer imagewise,” and the rest is history.