THIS YEAR is the 100th anniversary of the birth of theatrical great Orson Welles. Likely, he’s best remembered for his 1941 movie Citizen Kane, consistently ranked among the all-time greatest films; his 1938 Mercury Theatre on the Air radio broadcast of War of the Worlds giving many a Halloween fright; and his 1937 Mercury Theatre Julius Caesar with its Mussolini fascist staging.

But even before this, Welles excelled in a program that promised “free, adult, uncensored theatre,” the government funded Federal Theatre Project. Here are some tidbits from a book on the subject.

If ever theater needed an angel, it was in 1935. The U.S. was in the depths of the Great Depression. What’s more, radio and talkies had already drawn people away from live theatrical productions. Like other people at the time, writers, artists, musicians and actors were unemployed. As part of the federal government’s initial $4.88 billion establishing the Works Progress Administration in 1935, $27 million was devoted to the Federal Theatre Project.  (Note, the WPA was renamed Work Projects Administration in 1939.)

Within a year, some 15,000 theater people around the country were receiving a weekly stipend of $23.86 (around $415 in today’s money). During its four-year existence, 1935 – 1939, the FTP supported 830 productions, some 65 percent presented free of charge, playing to 30 million people in more than 200 theaters. Among these were new productions, revivals, classics and translations of foreign language plays.

According to Free, Adult, Uncensored, an example of the FTP at its best was the 1936 Welles production of Shakespeare’s Macbeth, staged as part of the New York City Negro Theater Unit. This classic was chosen by black actors to “discard the bandanna and burnt cork” image of their stereotype roles. 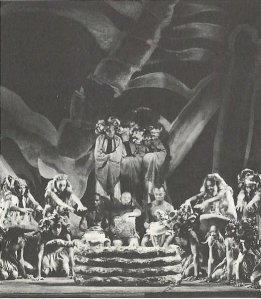 Macbeth, 1936. Welles and the New York City Negro Theater Unit set the Shakespeare classic in Haiti. This and other images from Free, Adult, Uncensored.

In what became known as the Voodoo Macbeth, its setting was changed from Scotland to Haiti. Classical composer Virgil Thomson provided dramatic background music. An African dance troupe stranded in New York was offered employment as well. The production was a major hit. After a seven-month run in Harlem, the play went on national tour.

Next, Welles and business partner John Houseman moved downtown to continue revivals of the classics. Their 1936 production, Horse Eats Hat, was based on a 19th-century French farce. Several cast members were to become Welles regulars, among them Arlene Francis and Joseph Cotton.

Marlowe’s Elizabethan classic Doctor Faustus is considered “one the Federal Theatre’s most dazzling productions. Originally scheduled as a two-week filler, it played to full houses for the first five months of 1937,” this, according to Free, Adult, Uncensored.

At the time, Welles noted the FTP’s unique attraction. “The audience was fresh. It was not the Broadway crowd…. Even less was it the special audience one has learned to associate with classic revival. One had the feeling every night that here were people on a voyage of discovery in the theatre.”

Mephistopheles was portrayed by Jack Carter, who had previously starred as Macbeth in the Voodoo Macbeth.

Welles devised trapdoors, side and top lighting and black velvet curtains that revealed Mephistopheles in a puff of smoke. Said FTP national director Hallie Flanagan, a Vassar College theater professor, “More subtle than the red flares and necromancy was the emphasis on an element of tragedy more in keeping with our age than that of a man being snatched away by the devil….” 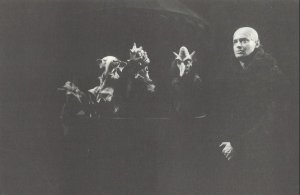 Lewd puppets representing the Seven Deadly Sins were devised by Bill and Cora Baird, later known for their work on television and in the movie, The Sound of Music. Cora provided the puppets’ voices in the play.

The FTP was closed down in 1939, overwhelmed by Congressional criticism of a small number (less than 10 percent) of the productions. One of its ironies was a Congressional objection to the musical Sing for Your Supper; this, despite its patriotic finale, “Ballad for Americans,” being chosen as theme song for the 1940 Republican National Convention.

Orson Welles’s career, though, was only beginning. He was 25; Citizen Kane was a year away. ds

3 comments on “ORSON WELLES AND THE FEDERAL THEATRE PROJECT”