BUILDINGS ARE stationary; automobiles move, a truism that would seem to separate architects from automobile designers. However, there have been synergies between the two, with interesting results from the likes of Le Corbusier and Norman Bel Geddes, not to omit the lesser known Carlo Mollino. A wonderful source for these and others is Ivan Margolis’s book Automobiles by Architects.

For example, Charles-Édouard Jeaneret-Gris, better known as architect Le Corbusier, was an early urban planner who also appreciated the benefits of personal mobility. He was a car nut who called a house “a machine for living.”

In 1935, Le Corbusier and his cousin Pierre Jeanneret entered their Voiture Minimum automotive design in a competition set by the Société des Ingénieurs de l’Automobile. The SIA’s rules demanded a closed two-seater capable of 75 km/h (47 mph) with fuel consumption better than 5 liters/100 km (47 mpg) and an envisioned price of half that of a middle-class car of the era.

The Voiture Minimum was to have an extremely aerodynamic shape, a rear-mounted engine and safety protection encircling the entire structure. Though Le Corbusier tried to interest automakers in the design, no one bit. For the full story, see Voiture Minimum: Le Corbusier and the Automobile, by Antonio Amado.

In fact, although the SIA received 102 entries, no winner was selected because no one was able to envision a design meeting the desired selling price. One design, however, did go on to automotive fame: The entry of Dante Giacosa and Rodolfo Schaffer became the Fiat 500 Topolino.

Like Le Corbusier, American Norman Bel Geddes had enthusiasm for future mobility. In 1932, Bel Geddes wrote in his book Horizons, “Today, speed is the cry of our era, and greater speed one of the goals of tomorrow.”

Bel Geddes’ work in theatrical and industrial design was highly regarded. However, author Margolis observes, “Bel Geddes believed—mistakenly, along with many others—that a falling drop of water has a teardrop shape and as such was an inspiration for the streamlined form.” (In fact, a falling drop of water resembles the top half of a hamburger bun.)

In the early 1930s, Geddes did a series of particularly radical automotive designs in keeping with his teardrop assumption. He also conceived an entire urban and exurban environment of 20 years into the future for GM’s Futurama exhibit at the 1939 New York World’s Fair.

The name Carlo Mollino may be less familiar than Bel Geddes or Le Corbusier. However, this Italian architect and furniture designer also played a role in one of the more extraordinary automobile designs running the Le Mans 24 Hours of Endurance. 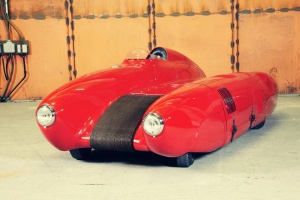 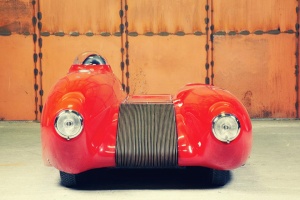 The twin nacelles of the Bisiluro are connected by a central structure containing the radiator.

Mollino’s original design had an airbrake (à la Mercedes-Benz 300SLR, that same year), pedal-actuated and rising out of its central panel. However, Le Mans required a modicum of passenger accommodation, and the airbrake hardware had to be replaced by a seat for an imaginary passenger. 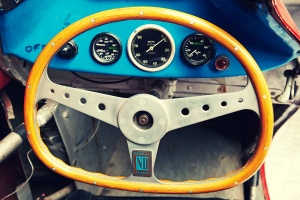 The Bisiluro’s Nardi steering wheel has an unconventional shape.

Other innovative features of Mollino’s design included an oblong Nardi setting wheel for clearance in the tight cockpit and a retractable rearview mirror enhancing the car’s aerodynamics.

Image from Automobiles by Architects.

Nardi constructed the tubular steel chassis, with a 734-cc Giannini G2 four-cylinder and its rear-wheel drivetrain. Carlo Gianini (only his company added the second “n”) designed the double-overhead-camshaft powerplant along the lines of those powering highly successful 1953 – 1954 Moto Guzzi Grand Prix motorcycles.

Drivetrain for the Bisiluro resides in the righthand nacelle.

The Bisiluro weighs only 992 lb. and its 62-hp powerplant propelled it to a recorded 220 km/h (137 mph) down le Droite des Hunaudières at Le Mans. Alas, Jaguar’s D-Type was blasting down this same Mulsanne Straight at 172.8 mph, and this difference caused turbulence that tossed the Bisiluro into the weeds as a D-Type passed.

Neither driver Mario Damonte nor the car suffered from this off-road excursion, but racing history of the Bisiluro DaMolNar ended after only 2 hours 28 minutes of the 1955 Le Mans. The car now resides in the Museo Nazionale Scienza e Tecnologia Leonardo da Vinci in Milan. ds

This entry was posted on May 5, 2015 by simanaitissays in Classic Bits and tagged "Automobiles by Architects" by Ivan Margolis, Carlo Mollino, Le Corbusier, Norman Bel Geddes.