AUTOGYROS IN SONG, LEGEND AND THE NEWS

OUTSPOKEN ENTHUSIASTS of fixed-wing aircraft claim that helicopters don’t really fly, they’re just so ugly that the Earth repels them. I wonder if this same opinion applies to another form of rotary-wing craft, the autogyro.

Known by a variety of names, the autogyro/gyroplane/gyrocopter has been around since 1923. It has appeared in song lyrics and Hollywood flicks. Amelia Earhart flew one. So did Batman. And, on April 15, 2015, so did a Florida mailman gyrocopting through restricted Washington, D.C., airspace and landing on the U.S. Capitol lawn.

Regardless of its aeronautical aesthetics, the autogyro is worthy of mention here. 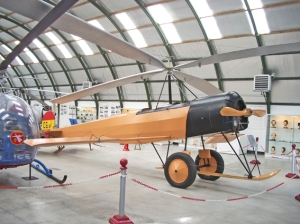 An autogyro has a conventional propeller for its forward thrust. However, unlike a fixed-wing aircraft, it depends on a mast-mounted spinning rotor for its lift. And, unlike a helicopter’s, this rotor is not powered; it spins freely in reaction to the air flow of the craft’s forward motion.

An autogyro is not capable of a helicopter’s hovering flight or vertical takeoff. Once in motion, however, its rotor enables an autogyro to land in extremely short distances. In fact, this capability was key to the autogyro’s genesis.

As a boy, Juan de la Cierva y Codorniu experimented with aviation. In 1919, he sought to devise a parachute craft, of sorts, an aircraft capable of some semblance of continued flight after engine failure. Cierva’s solution, the first free-rotary-wing aircraft, flew in 1923. He moved to England in 1925 and founded the Cierva Autogiro Company.

Cierva’s prototype used a coiled rope to initiate the rotor spin from rest. Soon, he devised a means of powering the rotor, disconnected once autorotation was achieved through forward motion, air flow and rotor tilt.

An autogyro’s longitudinal pitch and lateral roll depend on tilting the rotor. Its rudder controls yaw. Some autogyros have a means of reducing angle of their rotor blades to accelerate rotation to its optimum. Unlike a helicopter’s, though, this rotor-blade pitch adjustment has nothing to do with the autogyro’s control. 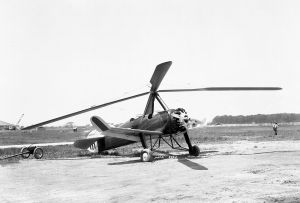 A Pitcairn-Cierva PCA-2 autogyro, the first to have type certification in the U.S., 1930.

Under license from Cierva, the Pitcairn and Kellett companies built versions of the autogyro in the U.S. (The Autogiro spelling was a Cierva trademark.) In 1931, The Detroit News bought a Pitcairn PCA-2 for aerial news coverage. That same year, another PCA-2 landed on the South Lawn of the White House (with full authorization of President Hoover).

Autogyros made other marks in popular culture. Batman’s first flying machine was the Batgyro, introduced in Detective Comics in 1939. He swapped it for a fixed-wing craft after only three appearances.

King Westley, the pompous bridegroom in It Happened One Night

, the Clark Gable/Claudette Colbert classic, arrives for the wedding in a Kellett K-3 autogyro.

In a pivotal scene in the movie It Happened One Night, bridegroom King Westley arrives for the wedding in his Kellett K-3 autogyro. Image from http://www.imcdb.org.

The pop standard I’ll Buy That Dream contains the phrase, “a honeymoon in Cairo, in a brand new autogyro…” The song written around 1944 has melody by Allie Wrubel (who also composed Zip-A-Dee-Doo-Dah) and lyrics by Herb Magidson. Kitty Kallen singing with the Harry James Orchestra made it a hit in 1945. (In fact, some sources mistakenly credit Harry James with the song.)

Last, the autogyro, in lightweight gyrocopter form, made a recent political statement with the April 15, 2015 flight of Florida mailman Doug Hughes. Wishing to make a point about governmental priorities (and delivering supportive letters that he stamped!), Hughes flew his gyrocopter the 80 miles from Gettysburg, Pennsylvania, to the restricted airspace and a no-fly zone of Washington, D.C.

Much to his surprise, Hughes’ flight was utterly without interference. People waved as he flew low over the National Mall; Hughes waved back. He landed his gyrocopter on the West Front Lawn of the U.S. Capitol building, to be met by security officials.

Hughes was asked by a reporter, “Do you consider yourself a patriot?” Flying in his USPS garb, he responded, “No. I’m a mailman.” ds