LEGO, UP; FERRARI, DOWN

A BRAND is a lot more than the name of a product or service. It’s a collection of aspects, including design and logo, patents and other intellectual property, as well as intangibles perceived by everyone from company personnel and investors to consumers.

Brand Finance, founded in 1996, is headquartered in London, with offices and partners in Australia, Singapore, the U.S. and 16 other countries worldwide; www.brandfinance.com.

The British firm Brand Finance specializes in brand analyses, and its 2015 Global 500 report is filled with nuggets of the world’s strongest 500 brands. Why is Lego the world’s most powerful brand? How come Ferrari dropped from first to ninth in one year? What is the world’s most valuable brand? And do your favorites make the cut of the top 500? 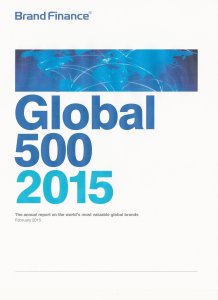 Brand Finance begins  with brief descriptions of its math modeling. At its heart is ISO 10668:Brand Valuation, an extensive set of recommendations for such activities published by the International Organization for Standardization.

ISO, founded in 1947 and headquartered in Geneva, Switzerland, is an umbrella organization of 163 member countries’ standardization efforts.

BF calculates Brand Value in a multi-step process. First, its Brand Strength Index is derived from aspects including a brand’s marketing investment, its goodwill and its sustainability. Next, the brand and its competitors are analyzed to get a Royalty Rate for their business segment. (I suspect, for example, the Royalty Rate for pharmaceuticals is high; supermarket chains, low). Also, a brand’s contribution to its company’s revenue, historic and future, is calculated. Last, the product of these three gives its BV, Brand Value.

In particular, note the distinction between BSI, a brand’s marketing power, and BV, its monetary worth.

The world’s most powerful brands, based on their Brands Finance BSI scores.

Brand Finance rates Lego as the world’s most powerful brand. (By contrast, Apple tops the Global 500 list of Brand Value for the second year running.)

BF insights into these and other brands give an idea of the scope of its analyses. “Lego’s appeal,” notes BF, “spans generations; as well as the creative freedom it gives children, the brand appeals to the nostalgia of adults.” A strong performance of The Lego Movie is also cited (“the top grossing film of 2014 in the UK and Ireland”).

Lego replaces Ferrari as the most powerful brand in the 2015 report. BF offers insights on the exotic carmaker’s fall from first to ninth in BSI in one year (though it rose slightly from 350 to 295 in overall Brand Value). About Ferrari’s Formula 1 effort, “The sheen of glory from its 1990s golden era is wearing slightly thin.”

BF also offers implications of Fiat chairman Sergio Marchionne’s replacing Luca di Montezemolo as Ferrari head. An intended broadening of the marque’s availability “…may disappoint existing owners and cause jitters ahead of Ferrari’s forthcoming IPO.” On the other hand, “The Ferrari brand clearly had huge untapped commercial potential and Marchionne’s open-minded approach bodes well for investors.”

The world’s most valuable brands, a combination of brand power, brand revenue and its segment’s royalty rate.

Apple remains the world’s most valuable brand, despite detractors having been “predicting the brand’s decline for years now.” BF notes as well that Apple has survived Steve Job’s death, with his successor Tim Cook demonstrating that Apple’s new product pipeline can continue to dominate.

For example, BF sees the recently introduced Apple Watch as important in supporting “Apple pay,” the company’s strategy of allowing consumers to pay transactions through mobile devices. BF sees this as “a major threat to financial services brands.” It predicts that, before long, the Apple brand will extend into this financial segment.

It must be getting near dinner time. ds

This entry was posted on March 23, 2015 by simanaitissays in And Furthermore... and tagged Brand Finance's Global 500 2015, Brand Finance. brand strength and value modeling.