IS LATIN a dead language? Far from it if you’re into the biological sciences, philology, law or medicine. Or if you happen to be using an ATM in Vatican City. Or if you’re at Wallsend metro station in Tyne and Wear, a county in the north of England that once represented an outpost of the Roman Empire.

My research in these matters was piqued by “Not Dead Yet,” a review by Anthony Grafton in the January 8, 2015, edition of the London Review of Books. I found Grafton’s review of Latin: Story of a World Language to be filled with copadia (Latin: tidbits).

For instance, even with the Fall of Rome occurring between 376 and 476 A.D., this language of Caesar, Cicero and Virgil continued to thrive. In fact, Grafton cites Leonhardt’s observation that “ancient texts represent no more than 0.01 percent of all surviving Latin.” Latin has been a second and universal language throughout the Western World.

Not that the language didn’t evolve over the centuries. By the seventh century, Grafton notes, “Most writers, outside the most learned Irish monasteries, conflated cases and declensions and dropped their aitches with abandon.”

England’s Magna Carta, composed in 1215, was written in a Latin rich with abbreviations. When the bawdy poems of Carmina Burana were composed, mostly in the 11th and 12th century, they were principally in Medieval Latin, an evolution of Vulgar Latin. Appropriate though it may sound, the term Vulgar here means “of the common folk,” not “coarse” or “obscene.”

The Vulgate Bible was adopted in the mid-1500s as the official Catholic Church Latin version.

Ecclesiastical Latin, used universally in Catholic churches until the 1960s, evolved from this particular branch of the language. It continues today as the official language of the Holy See (though Vatican City’s official one is Italian). 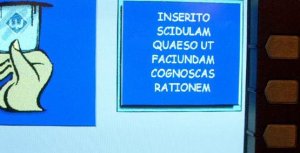 ATMs in Vatican City offer a choice of language.

When Sir Isaac Newton formulated his Philosophiae Naturalis Principia Mathematica in 1686, he composed the work in English, then translated it clause by clause into grammatically correct Latin.

Grafton notes that Newton’s use of Latin was “not because he thought Latin was especially appropriate for discussing planetary motion but because, like other scientists across Europe, he wanted his findings to circulate across borders.” German mathematician Carl Friedrich Gauss published in Latin for this same reason 150 years later.

In areas other than natural philosophy (as the sciences were termed back then), Latin faded as the universal language. When Johann Sebastian Bach was hired in 1723 as Kantor of the Thomasschule in Leipzig, he was not certified to teach Latin, as his predecessors had been.

Even in the world of diplomacy, Thomas Jefferson’s “unanimous Declaration of the thirteen States of America” composed in 1776 required no Latin embellishment.

However, as Grafton observes, “Latin and its supporters have had more crowd-pleasing death scenes than any diva in the history of opera.” What’s more, Leonhardt’s book concludes with a plea to teach Latin as a living language.

As an example, Grafton cites the Paideia Institute for Humanistic Study, founded in 2010 by former students of the Vatican Latinist Father Reginald Foster. In addition to total-immersion summer programs in Rome, Paideia works with high schools and universities in the U.S. to enhance their offerings in Latin and Ancient Greek languages and literature.

This entry was posted on February 26, 2015 by simanaitissays in Uncategorized and tagged "Not Dead Yet" by Anthony Grafton, Latin: Story of a World Language by Jurgen Leonhardt, London Review of Books, Vatican City ATM, Wallsend metro station in Tyne and Wear.