RECENT ANALYSES by the World Resources Institute question the contribution of biofuels to the sustainability of food and climate. The paper “Avoiding Bioenergy Competition for Food Crops and Land,” http://goo.gl/A8mt2m, is by WRI’s Tim Searchinger and Ralph Heimlich. Briefly, its summary report, “Why Dedicating Land to Bioenergy Won’t Curb Climate Change,” http://goo.gl/uB9ui1, offers a lesson: “Do not grow food or grass crops for ethanol or diesel or cut down trees for electricity.”

Yes, I have banged on about it.

To me, a significant aspect of WRI’s research is its source: not an energy company, not an automaker, but an organization with independent views on the matter. The World Resources Institute undertakes non-partisan analyses of climate, clean energy, food, forests, water, cities and transportation.

WRI was established in 1982 with funding from the John D. and Catherine T. MacArthur Foundation, renowned for its MacArthur Fellowship “genius grants” and other philanthropy. Today, WRI has a staff of more than 450 in Brazil, China, Europe, India, Indonesia and the U.S.

WRI fosters an approach of “Count it, Change it, and Scale it.” Independent analyses of data lead to insights and recommendations. Change comes through influencing government policies, business strategies and societal action. Once tested on a small scale, expansion follows on regional and global levels.

The issue of food versus fuel is a complex one, with plenty of views heating all extremes. Here are several of WRI’s points. You’re encouraged to read the full report or, at least, its summary, at the sources noted above.

A world challenge is to close the 70-percent gap between available food supplies and those needed by 2050. Yet there are growing needs for energy as well.

In the past decade, governments have encouraged using crops for transportation biofuels (in place of petroleum) and harvesting trees for electric power generation (in place of coal).  However, WRI analyses show that these trends undercut environmental efforts and the future of sustainable food production.

Even cellulosic biofuels (those derived from crop residues and other waste) have a negative effect. “For example,” the WRI summary notes, “a hectare of maize in the U.S. currently produces roughly 1600 gallons of ethanol (about 6000 liters). For cellulosic ethanol production just to match this output, the grasses or trees must achieve almost double the national cellulosic yields estimated by the U.S. Environmental Protection Agency and two to four times the perennial grass yields farmers actually achieve today in the United States.”

Succinctly, trees and grasses aren’t as productive in their use of land, as compared with that of conventional agriculture.

There’s another tradeoff of land use: Harvesting existing forests or woody savannahs for the cellulosic feedstock reduces their carbon storage to the detriment of environmental goals.

Wood pellets from U.S. suppliers are used to displace coal in European electric power production. Pellets, the theory goes, come from forestry thinning and waste; burning wood rather than coal is thought to have a beneficial carbon balance.

However, the WRI report observes that “Every time we dedicate land to bioenergy, we sacrifice the opportunity to use that land for some other human need, ranging from food to carbon storage.” Even the theoretical yield is not reassuring. 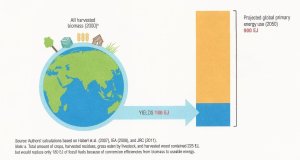 On the other hand, WRI notes “The good news is that standard solar cells available today can generate more than 100 times as much usable energy per acre as bioenergy even using optimistic projections for bioenergy’s future.” It emphasizes, “And, unlike bioenergy, solar energy works great in deserts and on rooftops without competing for fertile land.”

The WRI report recommends five changes in policy: Governments should update their environmental decisions to reflect current knowledge. Governments should phase out subsidies and regulatory requirements for transportation biofuels that involve dedicated land use. To encourage this, biofuels from such dedicated land should be ineligible from low-carbon fuel standards. What’s more, such biofuel feedstocks should be excluded from laws designed to encourage or require renewable energy. And, last, governments should maintain current limits on the share of ethanol in gasoline blends.

This entry was posted on January 31, 2015 by simanaitissays in Sci-Tech and tagged John D. and Catherine T. MacArthur Foundation, tradeoffs of biofuel, tradeoffs of cellulosic biofuel, World Resources Institute.