ADVERTISING IN AN EARLIER AGE

BEING A child of the 1940s, I am attracted to its arts, its music, its radio, its culture and ambience, even its hype. With this in mind, I’m happy to share a book in Taschen’s Icon series that is along these lines. 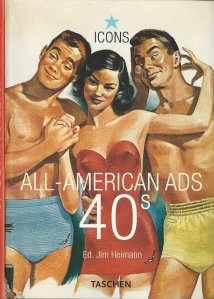 Like others in its Icon series, Taschen’s All-American Ads of the 40s has full-page and multi-page color images accompanied by bibliographic information of date and source. There’s also a thoughtful introductory essay that puts the era in perspective for younger readers. 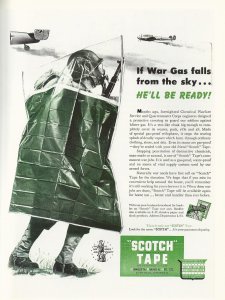 Back when the  product carried quote marks, “Scotch,” Minnesota Mining & Mfg envisioned it as having a crucial wartime use. This image, originally appearing in 1943, and others from All-American Ads of the 40s.

In particular, it was a U.S. that was soon involved in world conflict, with wartime mobilization, rationing and morale building. Advertising played essential roles in promoting wartime concerns (“Loose Lips Sink Ships”) and helping to finance the war effort through Bond Drives. 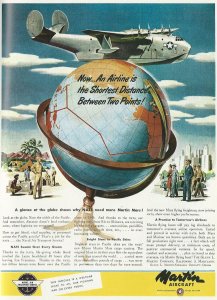 The end of World War II brought unprecedented U.S. prosperity, at least for those portrayed in the advertising messages. Even atomic energy had a bright future in the days preceding the Cold War. 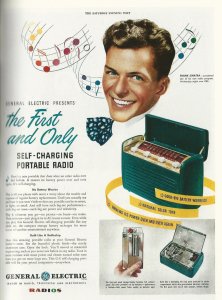 This G.E. portable was the iPod nano of the 40s. Its celebrity singer would one day portray Rocky Fortune. General Electric Radios, 1946.

Advertising profited from what later became known as the Baby Boom. By the end of the 1940s, 32 million kids were added to the U.S. population, a 33-percent increase in births over the previous decade’s.

Tempted to try wartime’s oleomargarine? Maybe not after digesting this ad message. The American Dairy Association, 1942.

Much of the advertising contained rather more text than we see in print ads today. Others had images that were informative, entertaining or just striking. 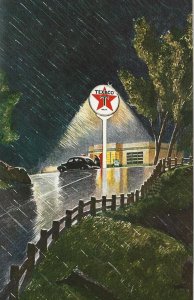 Security on a dark and stormy night. Texaco, 1941.

Advertising showed a naiveté (or was it commercial cynicism?) with regard to nutrition and health: “More doctors smoke Camels than any other cigarette!” Some ads also remind us how far we’ve come in stereotypes of gender and race. 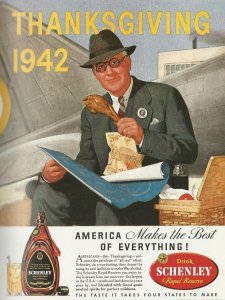 I respect the guy’s role in airplane design and admire his specs. But  Schenley and a drumstick for lunch?

Some ads offered messages that might have been subliminal, unintentional or simply untold and left to the imagination. ds