NOT COUNTING my visits to castles actually occupied by royals (I’ve been to Windsor), I’ve visited four castles, each memorable in a different way. One of its owners I’ve known personally. Another, I worked for his offspring. Perhaps two of the four castle owners played with less or more than a full hand.

Let’s sort out which is which before you lawyers call.

R&T contributor Rob Walker lived at Nunney Court, Nunney, near Frome, in Somerset, 115 miles west of London. See “On English Country Houses,” http://wp.me/p2ETap-1ZT for details of the home and its adjacent Nunney Castle. The latter dates from 1373 when it was built by Sir Walter de la Mere.

Above, Nunney Castle, Nunney, England, as it appears today. Image from http://www.english-heritage.org.uk. Below, a winter scene at Nunney Court, the castle in the background at right. Painting by Betty Walker.

Wife Dottie and I have many fond memories of the Walkers, rest their souls. Among perhaps lesser known skills, Rob knew how to tear a full-size phonebook in half; Betty could use a divining rod for searching out Roman coins in Nunney Court fields.

I visited Schloss Neuschwanstein once, as one of more than 1.3 million people who go there annually. King Ludvig II of Bavaria’s castle was inspiration for Disneyland’s Sleeping Beauty Castle (which, come to think of it, I’ve also visited). Ludvig’s tribute to composer Richard Wagner rises above the village of Hohenschwangau like a barely Earthbound Valhalla, about 80 miles southwest of Munich, Germany.

Neuschwanstein, its exterior largely completed in 1881, is in extravagant Romanesque Revival style. Within are what The House Book terms “endless murals depicting the Wagnerian legends, and culminating in a throne room worthy of Parsifal.”

Was Ludvig barmy in his architectural enthusiasm? Perhaps no more so that I am in enjoying Wagner’s five-hour operas. See “Are There Opera Divos?,” http://wp.me/p2ETap-u7, for details of the Ring Cycle.

Walter Edward Perry Scott, aka Death Valley Scotty, wasn’t barmy, but he was one helluva con man. In a sense, his ultimate con is having Scotty’s Castle named after him even though he neither built nor lived in the place. 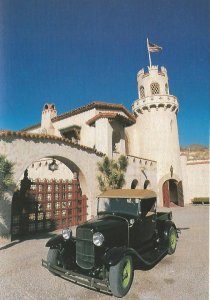 Scotty hit the road in 1883 at age 11 and never looked back. For a while, he toured the U.S. and Europe as a stunt rider with Buffalo Bill’s Wild West Show. He and Buffalo Bill had a falling out, but Scotty got the last laugh: Years later, such was Scotty’s fame that Buffalo Bill hired a Scotty impersonator for the show.

Scotty’s principal con was the gold mine scam, one he worked often for tens of thousands of dollars. His prospector persona came with a team of mules and a mine, the mules evident to all, the mine “hidden.”

In 1904, one of Scotty’s marks was Albert M. Johnson, president of National Life Insurance Company. Later, even after Scotty duped Johnson, such was Scotty’s charm that Johnson befriended him.

In 1922, Johnson began an elaborate vacation home, Death Valley Ranch, in Grapevine Canyon on the edge of Death Valley, 285 miles north of Los Angeles. Nearby, he built a five-room cabin for Scotty, with outbuildings for Scotty’s mules.

Though Scotty never lived in Johnson’s Spanish-Mediterranean style home, he hung out there enough so that the name Scotty’s Castle stuck. Johnson died at age 75 in 1948, but in willing the place to a religious organization, he made provision that Scotty could stay as long as he wished. Which he did. 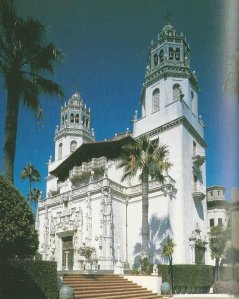 Everything about Hearst Castle is superlative: Its Casa Grande in flamboyant Spanish Mission style covers 60,645 sq. ft. Other buildings bring the total to more than 90,000 sq. ft. There are more than 130 rooms with thousands of art treasures mainly from southern Europe, indoor and outdoor pools, a pergola (shaded walkway) encircling the hill for more than a mile and a zoo.

A zoo? An earlier item, “Creative Hearing,” http://wp.me/p2ETap-1rY, contains a tale related to this. They were Zebras after all. ds