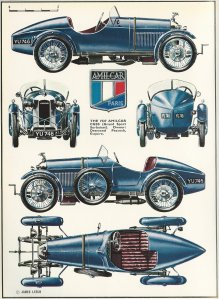 1927 Amilcar CGSS (Grand Sport Surbaisse). This, the racing image and other profile from Classic Cars in Profile: Volume 3: Profile Nos. 49-72

In the 1920s, the French government offered an annual tax break for what were termed cyclecars. These could weigh no more than 350 kg (772 lb.), carry no more than two people and have engine displacements less than 1100 cc (about a fourth the size of the smallest small-block Chevy).

More than 350 French automakers responded, most of them tiny job-shops in Parisian suburbs. Generally, cyclecars were designed for basic motoring, assembled from bought-out bits and not especially refined. However, buyers were willing to trade refinement for speed, acceleration and roadholding. As Amilcar authority T.R. Nicholson observed in his Amilcar Profile, “The sporting voiturette was a product of the Gallic temperament.”

And of the Roaring Twenties.

Joseph Lamy and Emile Akar established the Amilcar firm in 1921, its name an amalgam of their names. Amilcar quickly moved out of high-rent Paris to Saint-Denis, a northern suburb, where it remained during the 18 years of its existence, 1921 to 1939. 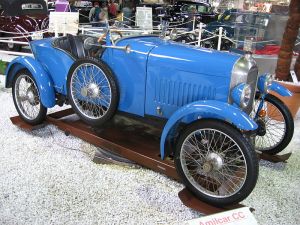 The firm set itself apart from the typical cyclecar builder by fabricating its own engine. On the other hand, this four-cylinder powerplant lacked the latest features. It was a sidevalve design when more advanced engines, even in its class, had overhead valves, the best of these actuated by double overhead camshafts.

And the Amilcar’s “splash” lubrication system was particularly ancien. The engine’s flywheel dipped into an oil supply in the sump, scooped up some lubricant and splashed it around, possibly even where required. If there was no oil to scoop, disaster soon followed. 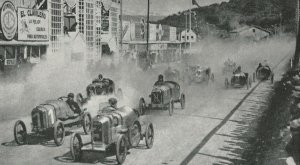 An Amilcar leads a Senéchal and two Salmsons at the Grand Prix des Cyclecars, San Sebastian, 1925. However, a Salmson won.

This engine didn’t prevent the marque from a racing program, which commenced in 1922. A 903-cc Amilcar won the first 24-hour Bol d’Or run in the Forest of Saint-Germain, just west of Paris. Other competitors, the double-overhead-camshaft Salmsons, for instance, had more advanced powerplants, whereas the Amilcars had lithe handling. They proved successful in hillclimbs throughout France.

The 1924 CGS or Grand Sport was the first Amilcar to feature front-wheel brakes, like all cars of the era mechanically, not hydraulically, actuated. The Amilcar’s front brakes differed from others in being actuated through rods as opposed to cables. Also, from this point on, most Amilcar engines abandoned splash lubrication for its modern pressurized counterpart. 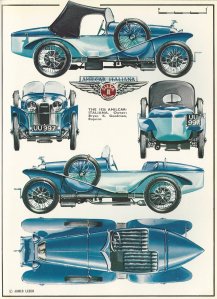 Builders in Austria, Germany and Italy licensed their own Amilcar variants. The German marque produced a particularly impressive nameplate: the Pluto-Kompressor-Typ 5/30/65 PS.

This wasn’t the only blown Amilcar variant. An Amilcar equipped with a Cozette supercharger won the Monte Carlo Rally in 1927. The car was one of the entrants starting from Königsberg, of Seven Bridges fame (see http://wp.me/p2ETap-2qf). 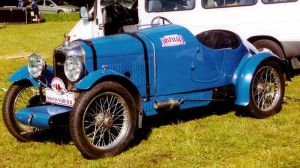 In CGSS trim, the Amilcar produced perhaps 35 hp at 4500 rpm, could achieve 80 mph and (not simultaneously) post better than 40 mpg. Nevertheless, as Profile author Nicholson notes, “Frenchmen had become soft, like motorists everywhere,” and by 1929 Amilcar was moving upmarket from its cyclecar origins.

The company offered conventional sedans, but world depression had its effect. The Amilcar Compound, introduced in 1937, was advanced indeed, with front-wheel drive and a light alloy body of unitary construction. 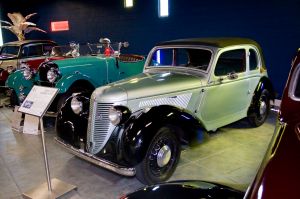 An upgraded Compound was scheduled for the 1939 Paris Auto Show. However, the Nazis had other plans, the show was canceled and the company didn’t last through the year.

Amilcar had a good run during the Roaring Twenties, though. ds