ART BOOKS are often oversize tomes appropriate for display on coffee tables, but I have a trio of them that would fit in a single pocket. Nonetheless, each celebrates its subject, opera and ballet, in an artful and compact manner.

The first two books served as catalogs for exhibitions at Bibliothèque-Musée de l’Opéra during 1992. Of the three, Rossini À l’Opera is the thinnest, not a book per se but a 12-panel foldout.

The work’s two pages of text give a brief summary of Gioachino Rossini’s career, including his 1824 appointment as musical director of Paris’s Théatre des Italians and subsequent composition of the opera Guillaume Tell. 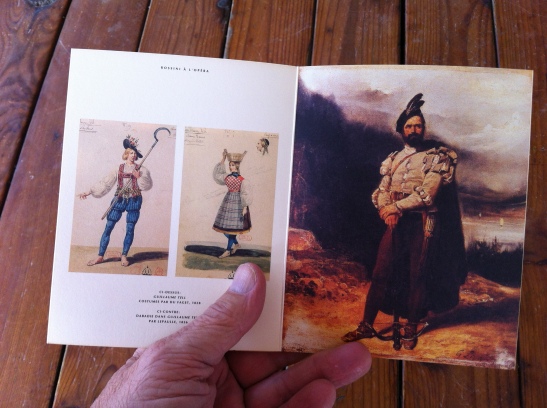 At left, costumes for Guillaume Tell (William Tell), 1829. At right, another William Tell outfit, this one from 1836.

Though William Tell is rarely performed these days, we all know part of its overture as the Lone Ranger’s theme.

Rossini wrote 39 operas, yet chose to retire from operatic composition at age 37 (he lived to be 76). Two passions continued throughout his life, fine food and its preparation. Indeed, culinary achievements alla Rossini (for instance, Tournedos alla Rossini) are likely his own concoctions, not merely named in his honor.

Though not a legend like Rossini, Pier Luigi Pizzi had a close relationship with the composer’s works because of his involvement with the Rossini Opera Festival in Pesaro, Italy. This 79-page book of his set designs served as catalog at another Bibliotèque-Musée de l’Opéra exhibition in 1992. Its essays share insights of augmenting an opera’s music and libretto with costumes and sets.

Pizzi’s sketches for his production of Gounod’s Faust, Munich Opera, 1978.

Pizzi is a Knight of the French Legion of Honor and a Commander of Monaco’s Order of Cultural Merit. He retired in 2008.

Though based in Paris, the Ballet Suédois was a predominately Swedish dance ensemble active between 1920 and 1925. This 77-page book lists its renowned productions, including Darius Milhaud’s Le Création du Monde. (See http://wp.me/p2ETap-1fG for my celebration of this work).

Murphy and his wife Sara were expatriates who supported many artists and writers of the Lost Generation. (See http://wp.me/p2ETap-1uI for my take on “Vintage Paris, Berlin & Hollywood).

The Immigrant costume, by Gerald Murphy, for Within the Quota ballet, Paris, 1923.

Murphy also did the libretto, sets and costumes for Within the Quota, a ballet-sketch in one act with music by Cole Porter. The Ballet Suédois’ premiere in Paris, 1923, was followed by a U.S. tour of 69 performances.

The book closes with a chronology of Ballet Suédois productions presented at the Théâtre des Champs-Elysées in Paris.

Works of the Ballet Suédois are considered high points of the 20th century’s synthesis of modern art. What’s more, these works are artfully (and compactly) displayed by the Bibliothèque-Musée de L’Opéra. ds

This entry was posted on November 19, 2014 by simanaitissays in And Furthermore... and tagged art of opera and ballet, Ballet Suedois, Bibliotheque-Musee de l'Opera, Gioachino Rossini, Pier Luigi Pizzi.