WIFE DOTTIE’S prudent editing precludes my calling this item “Nellie Melba—Toast of…” or “Nellie Melba—A Peach of ….” But, in fact, this extraordinary opera diva of a century ago was honored by famed chef Auguste Escoffier. He devised not only Melba Toast and Peach Melba, but also Melba Sauce (a sweet purée of raspberries and red currants) and Melba Garniture (tomatoes stuffed with chicken, truffles and mushrooms in a white sauce).

Dame Nellie Melba had that effect on people.

Nellie was born Helen Porter Mitchell in Richmond, Melbourne, Australia, in 1861. Her talent in music, particularly perfect pitch, was evident from childhood.

At age 21, she married Charles Nesbitt Frederick Armstrong, a Brit whose titled family had fobbed him off to Australia because of his drunkenness and other bad habits. Charles and Nellie separated after just over a year.

Her singing career took her to London in 1886 and then Paris, where she studied with Mathilde Marchesi, who pronounced, “J’ai enfin une étoile!” (At last I have a star!).

It was Marchesi who suggested the stage name Melba, as in Melbourne; Nellie is a diminutive of Helen. Recognizing Melba’s talent (but being a shrewd impresario) Maurice Strakosch offered her a 10-year contract at 1000 francs per annum; figure $5000 annually in today’s dollars. After signing, she received an offer from the Brussels Théâtre de la Monnaie, paying 3000 francs per month (today’s $173,000 annually).

This contractual quandary was soon resolved when Strakosch dropped dead. Four days later, October 12, 1887, Melba made her la Monnaie debut. She was an instant success.

In the early 1890s, Nellie had an extended affair with Prince Philippe, Duke of Orléans, who actively sought becoming King Philippe VIII of France. 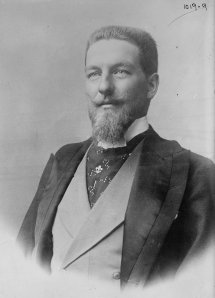 Prince Philippe, Duke of Orléans, 1869 – 1926, Orléanist claimant to the throne of France.

A handsome devil, the duke was named in more than one divorce case, including Armstrong vs. Armstrong 1900.

Despite these contretemps, Nellie helped in the social struggle to make performers respectable.

Nipper heard more than his Master’s Voice. Nellie was one of the earliest operatic performers to sing for the Gramophone.

It’s said that, after a command performance, Queen Victoria asked about Melba. The queen was told, “She is Madame and married to Mr. Armstrong, who belongs to a very respectable English family….” [Victoria was spared the nasty bits.] The aide continued, “She has been, to some extent, spoilt by her success but may also pass as respectable.”

Had Melba heard this, I suspect she would not have been amused.

As her success grew (and other singers rose), Nellie sensed the need to defend her own divahood. Standing in the wings as another soprano sang her heart out on-stage, Melba was known to offer a parallel—and loud—version in her own exquisite tones

In modern times, Nellie’s persona gave a recital at the Grantham household on TV’s Downton Abbey. Dame Kiri Te Kanawa played Dame Nellie, in an episode that got mixed reviews. This was primarily because the plot portrayed Melba as merely a visiting tradesperson. Objected The Telegraph, “The real Dame Nellie Melba wouldn’t have tolerated such treatment for a nanosecond.” (See http://goo.gl/OcmWCy.)

The memory of Nellie continues strong in her homeland of Australia. There’s a website, http://goo.gl/GXq7fU, with lots of entertaining tidbits.

One section of the website describes Nellie’s cars, including several imported from North America and used around the world.

Nellie (and her chauffeur) had a 1910 Russell 30hp Five-Passenger Touring, built by the Canada Cycle & Motor Company, Toronto Junction.

If you happen to be in Canberra, Australia (website stats indicate a goodly number of you are Ozzies), you can attend “Nellie Melba: Queen of Song” on Saturday, October 18. See http://goo.gl/XINMRA for details. The show is being performed at the Wesley Uniting Church in benefit of the Newborn Intensive Care Foundation, Canberra Hospital.

Nellie would have liked this. ds