IT’S AS though a bunch of aeroplane enthusiasts got together to make a comedy flick—and spin off a wonderful book. The full title, Those Magnificent Men in their Flying Machines or How I Flew from London to Paris in 25 Hours 11 Minutes, usually gets abbreviated to its first seven words. But, either way, the movie and book are absolute hoots. 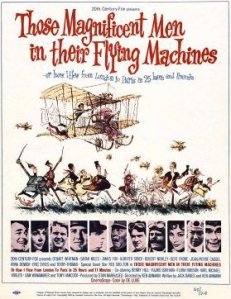 Those Magnificent Men in Their Flying Machines

the movie, 1965, starring Robert Morley, Sarah Miles, Terry-Thomas and Gert Fröbe (http://goo.gl/t5ZxzZ) Below, Those Magnificent Men In Their Flying Machines or how I flew from London to Paris in 25 hours 11 minutes 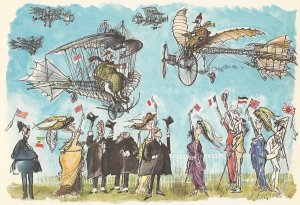 The competition, as interpreted by Ronald Searle, who did the movie titles as well as illustrating the book. Image from the book.

Lord Rawnsley is played by Robert Morley at his English pompous best. (“The trouble with these international affairs is that they attract foreigners.”) Rawnley’s suffragette daughter Patricia, played by Sarah Miles, is the love interest. Two pilots, one English and the other American, compete for her affections.

Terry-Thomas (he of the gapped front teeth) portrays Sir Percy Ware-Armitage, a cad who will do anything to win, except compete fairly.

Searle captures the innate badness of Sir Percy. Image from the book.

Gert Fröbe (“No, Mr. Bond, I expect you to die”) plays Colonel Manfred von Holstein, whose Prussian efficiency is less than perfect.

A separate love interest is in a side plot with French entrant Pierre Dubois, played by Jean-Pierre Cassel, who simultaneously romances women of six nationalities, French, German, Swedish, Belgian, Bulgarian and British.

Lucky Pierre, aka the Winged Wolf, his Santos-Dumont Demoiselle and friend, as interpreted by Ronald Searle. Illustration from the book.

That actress Irina Demick plays all six women is an in-joke suggested by Darryl F. Zanuck. Integral to this, ex-Hollywood mogul Zanuck was living in Europe at the time and romantically involved with Ms. Demick (who was actually French, of Slavic ancestry).

A venue for both the book and movie is the fictitious Brookley Airfield. Think Brooklands (http://wp.me/p2ETap-sk), even to its banked race track and sewage farm at one end of the property. What with inherently dangerous flying stunts, it’s ironic that the movie’s only injury came on the ground. A stunt man inadvertently launched his Edwardian cycle/sidecar combination off the banking and into the sewage farm. He received facial bruises and a dislocated collarbone.

Twenty aeroplanes were recreated for the flick. Six were flying replicas, several of which did double duty with minor changes of appearance.

Santos-Dumont and his original Demoiselle, 1907.

Though propelled by a modern, more powerful engine, the replica could barely get off the ground. Then someone recalled reading that Brazilian pioneer aviator Alberto Santos-Dumont was a little guy; evidently the stunt pilot was not. A suitably smaller pilot, Joan Hughes, replaced him. She had been a wartime member of the Air Transport Auxiliary (see http://wp.me/p2ETap-1Kf), and flew the Demoiselle replica with ease.

The American’s Phoenix Flyer was actually a flying replica Bristol Boxkite, built by Englishman F.G. Miles, of Miles Aircraft fame (see http://wp.me/p2ETap-255). The replica proved so tractable that it got through 20 takes of a risky landing after a scripted wheel loss. 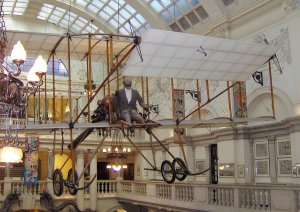 I’m told those of an impressionable age in the mid-1960s have the title song firmly lodged in memory. It can be heard at http://goo.gl/XXSts.

Be forewarned. It’s now stuck in my mind. ds

This entry was posted on October 16, 2014 by simanaitissays in And Furthermore..., Vintage Aero and tagged replica flying vintage aircraft, Ronald Searle, Those Magnificent Men in Their Flying Machines movie and book.