EMILE DARL’MAT apprenticed with French aviation pioneer Clément Ader and, thus, could have been an aircraft builder. But, instead, Darl’Mat chose automobiles. He started in 1923 with an auto repair shop in Paris; his company continues today as a Peugeot dealership in that city.

Ah, but in between, Emile Darl’Mat built custom-bodied sports cars.

Born in Brittany in 1892 (one source has it 1893), Emile Darl’Mat had a name of local heritage. Breton is a Celtic language originating in Early Middle Ages Britain. Roughly, in today’s vernacular, “dalc’h mad” means “hang in there!” 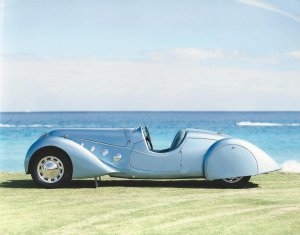 1938 Peugeot Darl’Mat Spécial Sport Roadster. This and other images of this particular car from Gooding & Company Amelia Island Auction, March 12, 2010.

The Darl’Mat of the late 1930s was styled by famed French designer Georges Paulin. It had successful runs at the Le Mans 24-hour endurance race in 1937 and 1938. And imagine the visual impact of seeing one on the street in Depression-era France.

The Darl’Mat repair shop grew into a new-car dealership featuring Peugeots. Respecting his abilities, Peugeot gave him resources to develop his own sports car. Darl’Mat turned to coach builder Marcel Pourtout, with whom he had exhibited a car at the 1927 Paris Salon. Later, at the Chicago World’s Fair in 1933, an aerodynamic Peugeot 301 was the product of Darl’Mat and Georges Paulin. 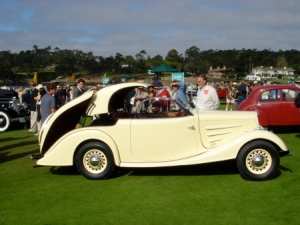 Another Darl’Mat/Paulin collaboration was the retractable hardtop of the Peugeot 401 Eclipse. (See http://wp.me/p2ETap-Pd for another look at this car and details of Paulin’s adventures as car designer/dentist/Allied spy.)

A trio of Peugeot 302-based Darl’Mat roadsters contested the 1937 Le Mans race. Specially prepared, these cars had hot powerplants and doorless bodywork even lighter than the standard wind-tunnel-developed Darl’Mat aluminum. The team finished 7th, 8th and 10th that year. 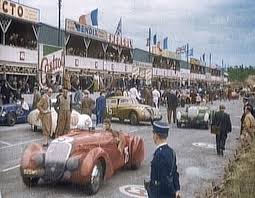 What’s more, they were among the automotive stars in Les Rois du Sport, a 1937 French comedy starring Fernandel (he of the toothy grin). The next year, 1938, a Peugeot 402-based Darl’Mat was First in Class placing 5th at Le Mans. More important, it beat its German Adler competition. 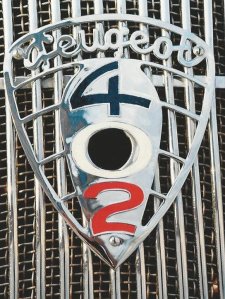 From 1936, Peugeot brought production of the Darl’Mat into its main Sochaux, France, facility. This particular 1938 Spécial Sport Roadster is one of perhaps 105 Darl’Mats, 53 Roadsters, 32 Cabriolets and 20 Coupes. Most of the open cars had the Eclipse retractable hardtop, though this one, 400247, came with a conventional canvas alternative.

Like all Darl’Mats, its engine is a Peugeot 2.0-liter overhead-valve inline 4. This engine produced a modest 70 hp at 4250 rpm, the car depending on its sleek lightweight bodywork for its performance. 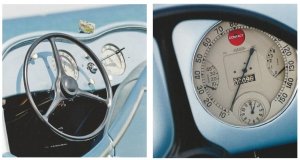 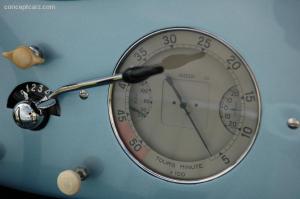 Lever selects the next gear of the Cotal gearbox in the Darl’Mat. Image from www.conceptcarz.com.

Not bad for a movie star from a Parisian Peugeot dealer. ds