NASH-HEALEY—MORE THAN A SPORTY IMAGE

SOME CARS just don’t get no respect. Here’s one that had its genesis on the Cunard Line’s Queen Elizabeth. The car went on to best the likes of Cunningham, Jaguar and Ferrari at Le Mans. It starred in two Humphrey Bogart flicks, one with co-star Audrey Hepburn. It was the motoring choice for TV’s Superman.

Yet, to car enthusiasts, the name Nash-Healey conjures up an image of a plush sporty car from the company that brought us the 1950s “bedmobile.” (Nash Ambassadors of the era were the hot tip for drive-in theaters, because their front seats reclined to form a bed with the rear ones.)

Englishman Donald Healey had apprenticed with Sopwith Aviation and served in the Royal Flying Corps during World War I. He more than dabbled in motor sports in the 1930s and built the first Healey car in 1946. Both the Healey Elliot saloon and Healey Westfield roadster were powered by hopped-up Riley engines and carried bodywork that had been wind-tunnel developed. With a top speed of 104.65 mph, the 1946 Elliot was the fastest British production car of its time. 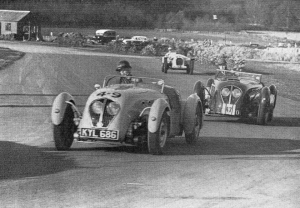 The Silverstone model followed in 1949. American enthusiast Briggs Cunningham bought one and swapped the car’s modest Riley engine for a Cadillac V-8. This prompted Donald Healey to visit Detroit and cut his own Cadillac deal. Thus, his 1949 voyage on the Queen Elizabeth (note, the original liner, not the QE2).

The result was the Nash-Healey, a Silverstone-based car fitted with a Nash Ambassador 3.8-liter six-cylinder powertrain. Being an enthusiast, Healey took an aerodynamic roadster version to the 1950 Le Mans 24-hour endurance race.

Sixty cars were entered; only 29 finished. Tony Rolt and Duncan Hamilton placed 4th overall in their Nash-Healey, beating, among others, Ferrari, Jaguar, Aston Martin and Cunningham (who entered a pair of Cadillacs, one with bizarre Le Monstre bodywork). A Healey Elliot saloon finished 19th.

Healey returned to Le Mans in 1951 with a streamlined coupe variant.

Nash-Healey’s 1951 Le Mans result split the Aston Martins and finished ahead of a pair of Ferraris.

The year 1952 was Nash-Healey’s most successful one. Leslie Johnson finished 7th in Italy’s Mille Miglia, with journalist Bill McKenzie as co-driver (predating the famed 1955 Moss/Jenkinson duo). 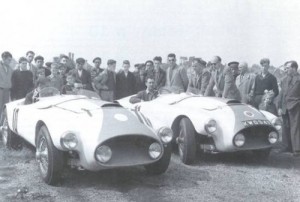 Le Mans 1952 was the debut of another famed racing machine, the Mercedes-Benz 300SL, which placed 1-2. Leslie Johnson and Tommy Wisdom drove their Nash-Healey to 3rd. This placing also won Nash-Healey the Rudge-Whitworth Trophy for best performance over two consecutive years.

The Nash-Healey roadster of Johnson and Bert Hadley did no better than 11th in 1953, though it actually completed more laps, 265 versus 262, than the previous year’s 3rd-place finish. There’s a wonderful historic video of Le Mans 1953 at http://goo.gl/6oGQSb.

By this time, back in Detroit, Nash Kelvinator was in negotiations leading to formation of American Motors Corporation. The company’s priorities changed—but what a racing career it had been for Nash-Healey!

The Nash-Healey road car gained fame in 1952, with Nash’s commission to Italian coachwork specialist Pinin Farina. (The carrozzeria evolved into Pininfarina; indeed, its founder had his surname officially changed to this in 1961. See http://wp.me/p2ETap-en.) 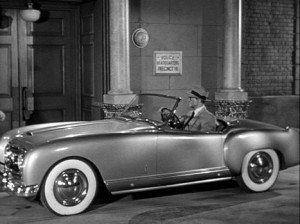 Is Clark Kent searching for a telephone booth? Image from http://goo.gl/eSLvZV.

When George Reeves portrayed Clark Kent/Superman in 1950s TV, he drove a Nash-Healey.

This and Le Mans heritage. What more could an auto enthusiast want? ds