WHEN I was a lad, I thought it was cool that a girl named Jane knew all about aircraft. It wasn’t until later that I learned the name was Fred T. Jane, and that he’d been publishing his authoritative annuals of aviation data since 1909.

I’ve acquired reprints of early Jane’s and they are fascinating reading. 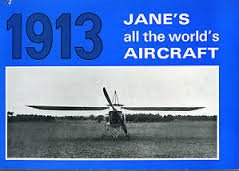 The series began in 1909 with All the World’s Airships (Aeroplanes and Dirigibles), offered at 21 shillings. This is exactly one guinea, an English monetary term that has been merely colloquial since 1814.

My 1909 Baedeker’s United States cites $1 as being worth around 4 shillings 2 pence. Hence, using the £ s d  information contained in http://wp.me/p2ETap-Qk, I calculate that Jane’s 1909 book cost the equivalent back then of $5.04; not inexpensive, figured at $121 in today’s dollars.

Performing these calculations reminds me of what I cited back in “What’s That in Guineas?” Namely, that their monetary system made the English the most honest people on earth.

Like his other early annuals, Jane’s All the World’s Aircraft 1913 includes listings of the world’s aero clubs, as well as military and private aviators. For instance, Glenn H. Curtiss has Aero Club of America Pilot Certificate Number 1; others are Army Lieut. F. P. Lahm (2), Frenchman Louis Paulhan (3) and Orville and Wilbur Wright (4 and 5, respectively). The book also records the death in 1912 of Miss H. Quimby (37). For Harriet Quimby’s adventurous life, see http://wp.me/p2ETap-1mI. For the aviation squabbles involving Curtiss, the Wrights and Paulhan, see http://wp.me/p2ETap-zA. 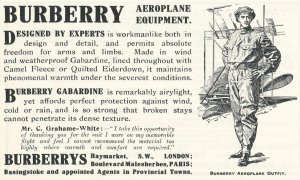 Burberry Gabardine outfit for flyers. A testimonial from Mr. C. Grahame-White: “I take this opportunity of thanking you for the suit I wore on my memorable flight….” This and other images from Jane’s All the World’s Aircraft 1913.

The two-page presentation for Bristol.

Even in 1913, national security was addressed in information purposely blanked out (investment capital and area of the Bristol works). Brief specifications for the 80-hp Bristol Military monoplane 2-seater cite its 73-mph top speed, 4-hour endurance and Gnome powerplant.

Another portion of Jane’s All the World’s Aircraft 1913 gives extensive details of the era’s aero engines. The French Gnome, for instance, was an air-cooled radial rotary, its crankshaft fixed to the airframe and its cylinders rotating with the propeller. (See http://wp.me/p2ETap-25K.) The Gnome’s 80-hp version is listed as having seven cylinders rotating at a maximum of 1200 rpm.

The book also has a 10-page Aerial “Who’s Who” of personages both historical and current in 1913. That guy with Pilot Certificate Number 2 is identified as “Lahm (Frank), Washington, D.C., U.S.A. Well-known aeronaut.” Josef Ferdinand (Grand Duke of Austria) is an “Enthusiastic aeronaut and moving spirit on aviatory matters in Austria.”

This entry was posted on August 12, 2014 by simanaitissays in Vintage Aero and tagged Bristol, Burberry, Gnome, Jane's All the World's Aircraft 1913.