YOU WANT SHORTER FRIES WITH THAT? OR HIGHER G?

GOOD SCIENCE is never over. To wit, something as ubiquitous as the french fry is the subject of news items in Science, published by the American Association for the Advancement of Science.

What’s more, given that Wife Dottie’s family worships Solanum tuberosum, it’s only fitting that I share these news items here: first, the proposition that shorter french fries are better for the environment; and, second, how would french fries taste on Jupiter?

As reported at an American Geophysical Union Science Policy Conference held in Washington, D.C., Canada’s Prince Edward Island has a nitrogen pollution problem, largely attributable to fertilizers that leak nitrates into ground water and the nearby Northumberland Strait. 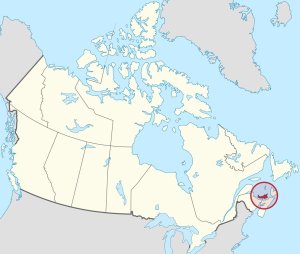 A lot of potatoes from a compact region: Canada’s Prince Edward Island.

The farmers of PEI are Canada’s largest producers of potatoes. And quick-food chains, a major buyer of their product, prefer long tubers, mainly because they believe folks prefer long french fries. 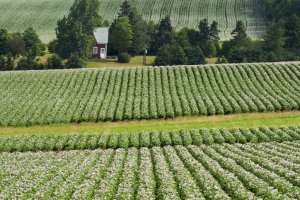 A PEI potato farm, part of it in blossom.

Alas, though, long tubers are slow-growing, and this complicates the nitrogen problem, at least indirectly.

Geochemist Martine Savard of the Geological Survey of Canada and George Somers of PEI’s Environment Department suggest a strategy for soaking up the troublesome nitrates: Space out potato production by sowing radishes or spinach, fast-growing and known as “catch-crops.”

However, the growth cycle of lengthy potatoes leaves less time for a catch-crop. And the farmers aren’t sure their quick-food clients will buy stubbier tubers.

It all depends, ultimately, on whether quick-food chains can sell shorter fries in the interest of a cleaner environment. Yet who among them has the environmental courage to be first? 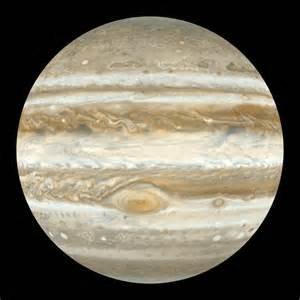 Jupiter, fifth planet from the sun, largest in the solar system.

The second matter, french fries on Jupiter, has implications closer to home than this largest planet in our solar system. Researchers at the European Space Agency investigated deep frying in different gravitational conditions, the aim being to improve space food for future astronauts.

They deep-fried potatoes cut into thin sticks, one side at a time, in a spinning centrifuge. Test conditions were as extreme as nine times Earth’s gravity. 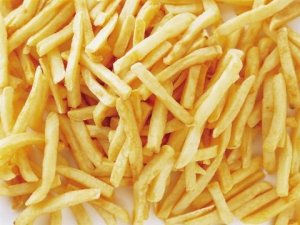 I’d use these as the control fries; they look well nigh perfect.

The researchers will be reporting their findings next month in Food Research International, a journal of the Canadian Institute of Food Science and Technology (http://goo.gl/n7Sf6n). In particular, they found that higher levels of gravity significantly increased heat transfer between the hot oil and potato. This led to shorter frying time and resulted in a thick, crispy crust on one side of the potato.

Jupiter’s gravity, at 2.53 Earth’s, was found to be near the sweet spot for optimal crust. Levels beyond 3g didn’t improve crispiness.

However, hyperfries had a downside too. Water vapor pushed out of the potato pores isolated the bottoms of the fries from the oil. This, regardless of g level, created soggy-bottom fries.

The researchers’ next phase is to investigate deep frying in microgravity, i.e., conditions with less gravity than Earth’s. 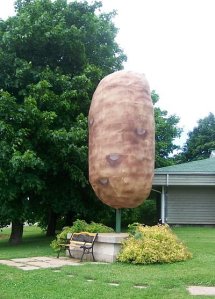 One large spud, albeit of fiberglass, residing at the Canadian Potato Museum. Image from www.peipotatomuseum.com.

Last, be aware that the village of O’Leary, about 70 miles northwest of Charlottetown, Prince Edward Island, is home to the Canadian Potato Museum. ds

One comment on “YOU WANT SHORTER FRIES WITH THAT? OR HIGHER G?”