I LOVE auction catalogs. They contain a wealth of information. Printed on fine stock, they are typically a bibliophile’s delight. 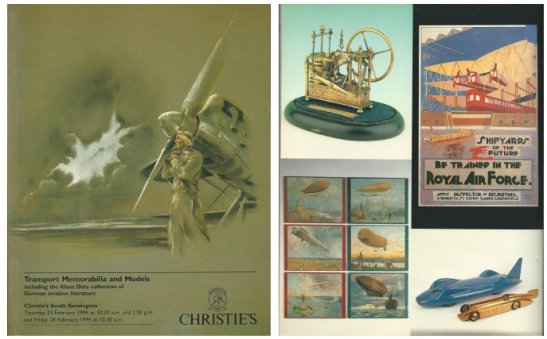 Christie’s catalog for a Transport Memorabilia and Models auction is a perfect example. In this catalog, the artwork is beautiful, the descriptions give fascinating details of history and technology. The prices may be out of sight, but there’s a vicarious pleasure in the catalog’s pages, as shown by the following.

Bristol Brabazon. From a rare manufacturer’s brochure describing this aircraft, in 1950 the world’s largest airliner. £180 – £220.

The brochure at auction had a gilt embossed cover and this frontispiece painting of the Bristol Brabazon by Terence Cuneo. See http://wp.me/p2ETap-1vJ for more information on this historic aircraft. See below and http://wp.me/p2ETap-1K2 for other examples of this English artist’s railway, cars and aircraft.

The Handley Page HP-42 was designed to specifications set by Imperial Airways in 1928. Four were in service from 1930 until 1940.

This static model had cutaway features showing the aircraft’s flight deck and passenger accommodations. A figure in the display case puts the size of a real HP-42 in perspective; it’s about the length of a modern Boeing 737.

Amazingly, this B-17 is a radio-controlled flyer. The model’s wooden framework is fabric-covered with realistic riveting and other details. The landing gear retracts; four O.S. Surpass engines power it; Futaba servos control its ailerons, elevators, rudder, flaps, engines and landing gear. 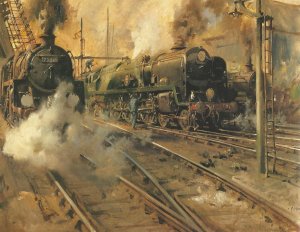 Hundreds of locomotives were built and serviced at Nine Elms. The facility operated in the London borough of Battersea from 1839 until its closing in 1967 with the end of the steam era.

Artist Terrence Cuneo, 1907 – 1996, evidently loved painting things that moved, locomotives, aircraft, cars, even industrial production lines. He was also the official artist for the coronation of Queen Elizabeth II in 1953.

This model, 4 x 4 1/4 in., is described as “extremely fine and delicate.” It was fabricated of brass and blued iron by John Burton, a model maker in Bradford, England. Its embossing reads, in part, “This engine made for the King of the Lilly Prussians, the amazing power of ten butterflies…”

A condensing engine is a type of steam engine that recycles its steam in a separate condensing tank. Devised by James Watt in 1775, the condensing engine used only 25 to 30 percent of the fuel required by its predecessor, the Newcomen engine. (See http://wp.me/p2ETap-1PR for more on the latter, originally used to pump water from coal mines.) 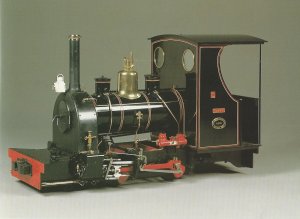 Model builder B. Hatfield fabricated this little sweetheart from copper and welded steel. The model was fully functional, on a railway of 7 1/2-in. gauge. It carried certification dated 20.12.94 for its boiler and pressure gauge.

The Hunslet Engine Company was founded in 1864 in Hunslet, England, about 190 miles northwest of London. These days it produces diesel-powered shunting engines, though a subsidiary still manufactures and maintains steam locomotives.

In the mid-19th century, such a portable power unit was moved to location by that most traditional of means, a pair of horses. (Recall horse-drawn fire companies.) 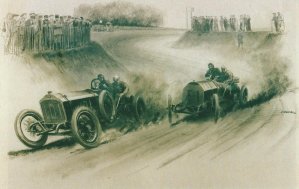 Peter Helck, 1893 – 1988, was one of the most highly regarded automotive artists. This particular work, inscribed on the reverse from Helck to William Court, was reproduced as a frontispiece in Court’s Power and Glory.