SELFRIDGES AND A DAY OF SHOPPING

THE BBC series Mr Selfridge is now in its second year of an anticipated three. I’m a fan of it and of the social phenomenon of shopping; to wit, http://wp.me/p2ETap-10O and http://wp.me/p2ETap-1xk. Plus, there’s another book on the topic I’m happy to share with you, one that places Harry Selfridge in perspective with social changes of the era.

The Golden Age of Shop Design: European Shop Interiors 1880 – 1939, edited by Alexandra Artley, Whitney Library of Design, 1976. The book is listed at www.abebooks.com and www.amazon.com.

Alexandra Artley observes the relationship between Art Nouveau and Art Deco movements of the time and shopping, the latter mirroring “the aspirations, if not the realities, of a rapidly changing society.” 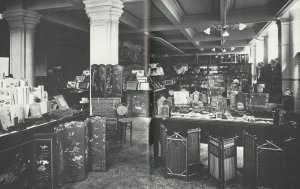 Fancy goods department at Charles Jenner & Company, Edinburgh, 1895. This and other images from the Golden Age of Shop Design.

These emporia evolved in the age of Art Nouveau, with rich architectural embellishments enhancing the scene. For example, in 1895 Victorian photographer Bedford Lemere documented Charles Jenner & Company’s store, everything from its departments for haberdashery, fabrics, glass and china, furniture and fancy goods to its central atrium and tea rooms.

The Art Nouveau opulence is striking today. The abundance of goods on open display appears normal to us.

Prior to that era, though, shopping was not expected to be entertaining. Artley cites “The Ethics of Shopping,” by Lady M. Jeune, The Fortnightly Review, January 1895, writing of the 1870s: “An afternoon’s shopping was a solemn and dreary affair, when one was received at the door by a solemn gentleman in black, who in due time delivered one over to another solemn gentleman and perhaps again to a third, who found one a chair, and in sepulchral tone of voice uttered some magic words, such as, ‘Silk, Mr Smith,’ or ‘Velvet, Mr A,’ and then departed to seek another victim.” 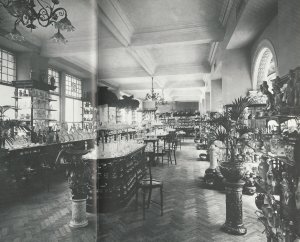 By 1895, the shopping experience was changing radically. The gallery of china and glass at Charles Jenner & Company.

Harry Selfridge’s entrepreneurial spirit enhanced these changes. As cited in BBC’s Mr Selfridge, he began his career as a stockboy in what evolved into Marshall Field Company in Chicago. While there, Harry is credited with first promoting the concept of “___ Shopping Days Until Christmas.” 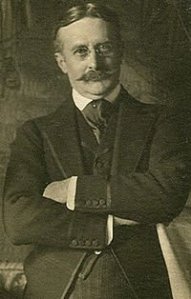 Selfridge started his own Chicago emporium in 1904, sold it at a profit in two months and enjoyed a life of leisure. Family travels to London in 1907 encouraged Harry to establish his grand Selfridge & Company. 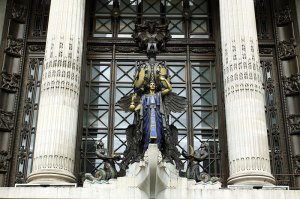 Writes Artley, “Perhaps Gordon Selfridge succeeded in making his new store just a little too substantial in attempted architectural effect…. ‘Don’t you be so Selfridge,’ in fact, became a catch-phrase among young Edwardian architectural wits like Sir Albert Richardson.”

On the other hand, Harry introduced the slogan, “Why Not Spend The Day At Selfridges?”

Or, today, with the help of the BBC, the evening too? ds

This entry was posted on May 26, 2014 by simanaitissays in And Furthermore... and tagged Harry Gordon Selfridge, Mr Selfridge, The Golden Age of Shop Design by Alexandra Artley.