JAKE JACOBSON AND HIS MILLER-FORD

MY VINTAGE racing career, a spirited though brief one, owed a great deal to Jake Jacobson. A fellow member of the Vintage Sports Car Club of America, Jake was the founder of the Old Spokes Vintage Racing Team and “mon patron” in this wonderful activity. 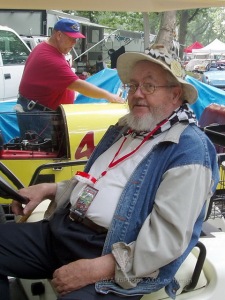 Years ago, Jake set up Sports Car Service, Inc., Delaware’s first Saab dealer. (The family continues to run it as an independent shop.) His garageful of cars—I can imagine him thinking the word “collection” sounded pompous—included a Saab Formula S (with frantic corn-popping two-stroke), a Morgan Plus Four (wood for its restoration came from a friend’s ash grove), a Morgan trike and a pair of sprint cars from the 1930s, a Dreyer and a Miller-Ford.

Yes, but this wasn’t Harry; it was Ralph.

Jake’s 1930 Miller-Ford sprint car; his Morgan Plus Four is visible in the background. Image by Ed Hyman.

In the late 1920s, a fellow named Ralph Miller published plans for building a sprint car. Start with a Ford Model A’s running gear and much of its suspension. Shorten an Essex frame for the chassis. And fabricate a swoopy single-seat open-wheel sprint-car body.

The Miller-Ford front end is basic Ford Model A, with some bits purposely left off.

A Ford Model A front end has a beam axle suspended on a transverse leaf spring, these bits retained for the Miller-Ford. Different friction shock absorbers are fitted. Front brakes? Forget them; sprint cars don’t need them. 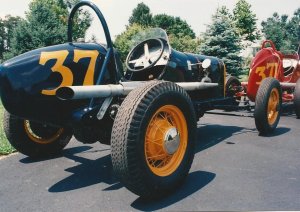 Rear suspension of the Miller-Ford retains the Model A’s live axle on a transverse leaf spring. The driver actuates its rear drum brakes by a lever to the left of the cockpit. There’s no brake pedal within, only an accelerator and clutch. (Fortunately, the gearbox bell housing prevents a right foot from stabbing the clutch by mistake.)

I had met Jake at a previous Pittsburgh Vintage Grand Prix and suggested the idea of doing an R&T story of the event from the seat of a borrowed race car. Jake, bless his heart, rest his soul, instantly offered the Miller-Ford for the July 1996 event. 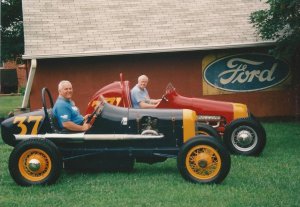 Spring of 1996, Jake and your author in his backyard. He is in his Dreyer sprint car.

Prior to the PVGP, Jake invited me to his Newark, Delaware, headquarters of the Old Spokes Vintage Racing Team. Look closely and you can identify the inspiration for its team graphics.

We warmed up the Miller-Ford and the Dreyer, then took turns chasing each other around the grass. The Miller-Ford’s engine had profited from Jake’s wizardry. He had applied plenty of period hop-up bits (and removed a considerable pile of metal shavings from the Model A’s massive flywheel). 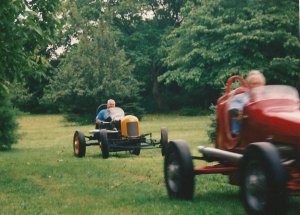 Catch me if you can; Jake in his Dreyer leads me in the Miller-Ford.

The sprint car kept the Ford’s three-speed gearbox, though first gear became superfluous. I recall Jake telling me, “Use second for starting off, then put it in third and keep it there. Your hands will be busy enough anyway.” The Miller-Ford had more than enough torque to tear up backyard sod.

Thanks to “mon patron,” I was going to have a ball around Pittsburgh’s hilly Schenley Park at the upcoming Vintage Grand Prix, of which more tomorrow. ds