THE HECK, YOU SAY

THE GERMAN term Heckmotor (rear engine) is usually reserved for Porsche and Volkswagen. However, in the 1930s, Mercedes-Benz preceded Volkswagen in offering rear-engine passenger cars to the public. And, as you might guess, Ferdinand Porsche was involved with them all.

This hardbound book, considerably more than a press kit, gives media information, a selection of period brochures, original-source documents of the cars’ inception and development, and a selection of magazine articles from the era.

What’s more, three of these cars of the 1930s were in brief residence in 2010 at the Mercedes-Benz Classic Center in Irvine, California, where I had opportunity to drive them. See http://goo.gl/8O41hQ for more information about this facility.

The Mercedes-Benz 130 was introduced in March 1934, more than a year and half before the Volkswagen prototype appeared. Both of these rear-engine cars were designed by Ferdinand Porsche. According to its sales literature, the trim little Mercedes-Benz 130 proffered “the ride comfort of a modern mid-size car and the running costs of a small car.”

Chassis of the 130 shows its Heckmotor (rear-engine) nature.

By contrast, the 150 Sport Roadster’s split windscreen and dual side-mounted spares give it a rakish appearance matching its brochure’s description as a “thoroughbred sports car” of the era. 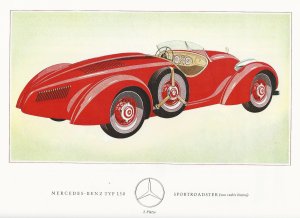 Properly termed a mid-engine car, the 150 has its 1498-cc inline-4 residing ahead of the rear axle though aft of the cockpit. 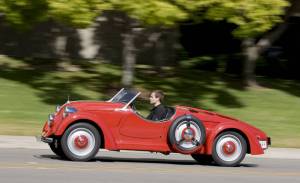 A brochure of the 150 Sport Roadster noted, “Each hp has a load of just 19 kg! This explains how the 150 has acceleration in every gear—and virtually on par with that of a supercharged car.”

In truth, the Sport Roadster was great fun to drive. However, I wouldn’t confuse its performance, virtual or otherwise, with that of a supercharged Mercedes-Benz 540K I once drove.

My favorite of these three Mercedes classics is the 170 H Cabrio-Limousine. In production from 1936 to 1939, the 170 H adopted the Heckmotor H to differentiate it from front-engine 170 models in the Mercedes-Benz lineup.

The 170 H Cabrio-Limousine with your author at the wheel.

At its introduction, Motor und Sport noted, “Has the general public finally grown accustomed to the shape of the rear-engine car or not? We, at any rate, can find nothing wrong with it.”

Nor can I. The 170 H is sufficiently roomy for my bigger-than-average-bear physique and its Cabrio version offers an unparalleled sunroof. 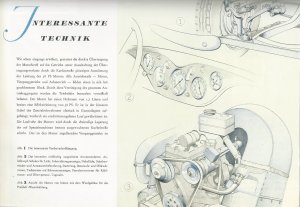 Interesting technology of the Mercedes-Benz 170 H.

Its rear-mounted engine displaces 1697 cc with an output of 38 hp. Gearbox is a three-speed plus “Overtop Gear-4th.” The fourth gear is a highway-cruise mode, a Schnellgang (loosely, a quick-gear) actuated through artfully clutchless maneuvering of the car’s lengthy gearshift.

As I noted in R&T back in June of 2010 (see http://goo.gl/jEu3rB), “…the fun of driving old cars such as these is in this mechanical involvement—something that’s missing all too often in today’s potentially drive-in-a-daze motoring.” ds