WHO WAS the first person to fly? Do balloonists count? What about piloting a glider? Was it Icarus? Orville or Wilber Wright? And what about New Zealander Richard Pearse?

There’s evidence that on March 31, 1903—more than eight months before the Wright bros. epic flight—New Zealander Richard Pearse flew his craft, albeit with only a modicum of control, for several hundred yards. On May 11, 1903, he took off, flew left, then right for a flight of nearly 1000 yards.

Why are Pearse’s achievements so obscure? It’s partly because of the isolation of Waitohi, the site of his flights, about 95 miles southwest of Christchurch, New Zealand—and half a world away from technical advancements of the Northern Hemisphere. And partly because Richard Pearse was a mad scientist, known for the oddity of his farm machinery inventions. Plus, Pearse was not the sort to seek notoriety. According to an extensive article by Bill Sherwood (http://goo.gl/4LavzK), the first formal mention of Pearse’s flights was years later in a 1909 newspaper.

In fact, there were conflicting recollections of those witnessing Pearse’s endeavors; some say 1902, though most set the flights in the spring of 1903.

A replica of Pearse’s monoplane resides in the South Canterbury Museum, in Timaru, New Zealand. Image by Karora.

Whichever year, Pearse’s achievements are noteworthy. In some ways, his craft had more in common with modern designs than the Wrights’. The Pearse was a monoplane with its engine and propeller in front; the Wright Flyer was a pusher biplane. Pearse located the craft’s stabilizer and elevator in back; the Flyer was a canard design. Pearse used ailerons, of sorts, in lieu of the Wrights’ wing-warping.

On the other hand, the wing surfaces of Pearse’s craft were flat surfaces. The Wrights had already experimented extensively with airfoils in a wind tunnel of their own design.

Both the Wrights and Pearse built engines of their own design. The Wrights’ was a horizontal inline-four, a conventional four-stroke powerplant, an innovation of which was its aluminum crankcase. It produced perhaps 12 hp.

The Pearse engine design. All components, even the spark plugs, were of his own design and fabrication.

Pearse’s was a two-cylinder layout, with its two opposed pistons operating in dual four-stroke mode. (This appears to be conceptually different from the “opposed piston-opposed” Ecomotors design under current development.) Pearse’s engine produced around 15 hp, like the Wrights’, sufficiently powerful to sustain flight of its lightweight craft.

About 1911, Pearse relocated his farming to hilly country that precluded his flying experiments. Later, in middle age he constructed a tilt-rotor autogyro-type machine, envisioned as personal transport for either the road or in the air. He died in Christchurch’s Sunnyside Mental Hospital in 1953. 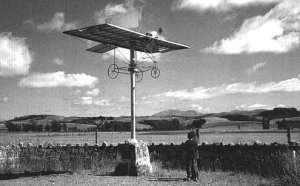 Was Richard Pearse the first to fly? Any matter of such historical priority requires definition. “Heavier-than-air” eliminates balloons flown since the 18th century. “Powered” rules out gliders piloted by Otto Lilienthal and others during the 1800s. Though the deeds and dates are uncertain, Pearse’s craft met these two criteria.

However, the element of control, the ability to maneuver a powered, heavier-than-air craft more or less at will, appears to leave honors with Orville and Wilbur Wright. 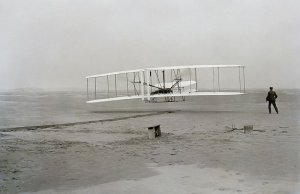 Within a year of Orville’s epic first flight, the Wrights were routinely circling above Huffman Prairie, near their Dayton, Ohio, home.