“TO TRAVEL,” Burton Holmes said, “is to possess the world.” And to share travelogues with others is a fine way to make a living, as exemplified by Burton Holmes’ photographs and commentaries based on a lifetime of adventurous travel. 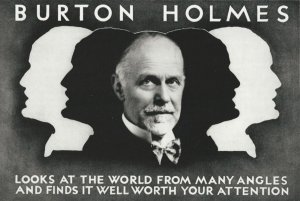 Burton Holmes had the advantage of being the only child of a cosmopolitan Chicago couple of reasonable wealth. His first foreign travel came in 1886 when he was 16. Six years later, he borrowed the necessary funds from his family for a five-month tour of Japan.

Holmes took plenty of photographs, and equally important, he sought out watercolor artists to hand-color his collection of glass lantern slides.

On November 15 and 22, 1893, at the age of 23 Holmes invited the (paying) public to his first travel lectures. Before long, he had identified his life’s work, together with a new word, “travelogue.” 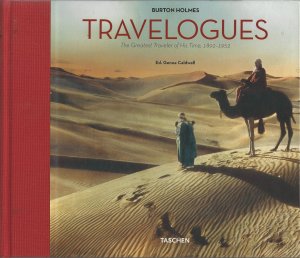 Burton Holmes Travelogues: The Greatest Traveler of His Time, 1892-1952, edited by Genoa Caldwell, directed and produced by Benedikt Taschen, Taschen, 2006. Both www.abebooks.com and www.amazon.com list the book.

This oversize volume (12.3 in. x 10.6 in., 6 lb., 366 pages) is published by Taschen, known for its art books. It collects photographs, most of them water-color-enhanced, and commentaries gleaned from Holmes lecture series given over six decades. The earliest photographs date from the fin de siècle; the most recent, from 1940. Holmes retired from lecturing in 1952. Here, I arrange several of my favorite images and commentaries in chronological order. 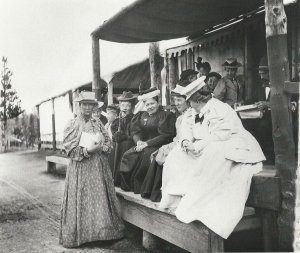 The Famous “Calamity Jane” at Yellowstone Park, 1896. This and other images from Burton Holmes Travelogues.

Holmes writes, “American frontierswoman Martha Jane Cannary (on the left, in the calico dress and straw hat), better known as Calamity Jane, was a colorful and much mythologized figure of the Old West.” 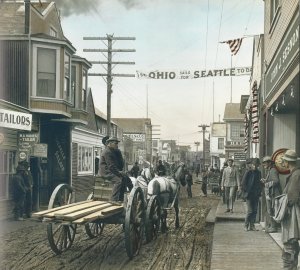 “Though Dawson is a busy place,” Holmes writes, “I found a large leisure class…. They bestir themselves only when the sun begins to bleach the sidewalk, transferring themselves with an air of injured dignity to a shady stretch of sidewalk just around the corner.” 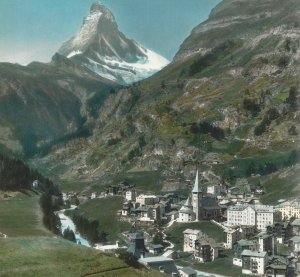 “No traveler,” Holmes writes, “feels that he has quite reached the heart of Switzerland until he finds himself at Zermatt.” See www.wp.me/p2ETap-1hP for “The Alps: Mountains of Prominence.” 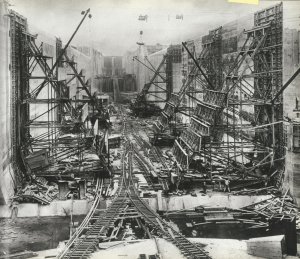 View of the Locks Under Construction, 1912.

“Just thinking about the undertaking,” Holmes writes of the Panama Canal, “you can get some vague idea of the enormity of the enterprise, the ingenuity, the daring, and the wealth of Uncle Sam.” 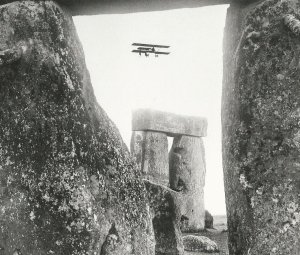 “It is with a thrill of wonder,” writes Holmes, “that we look through one of the titanic trilithons—which opens like a portal of the fathomless past—and see, framed there against the blue of the heavens, British military aviators cleaving the ancient sky.…” 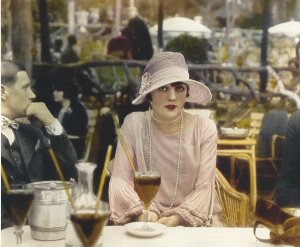 Writes Holmes, “I must urgently recommend that you spend your first leisure hour in Paris at the corner table of the terrasse of the Café de la Paix. It is a fact known and proved that … you have only to sit at this corner long enough, and a friend will appear in time.” 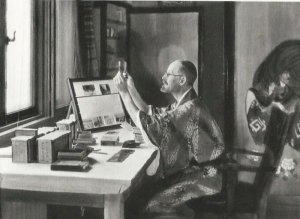 An Irish maid had applied for a position in the Holmes household, but took one look and decided otherwise. She reportedly told the agency, “Niver on earth would I wurrk in such a flat with haythen idols all over the place and a man wandering around in a kimony.” 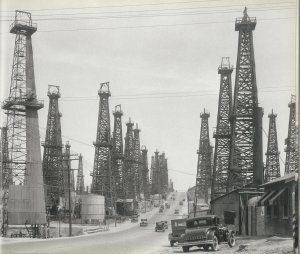 California, Holmes writes, “is not only our Italy with its sunshine and flowers, its volcanoes and vineyards; it is our Riviera too, with its blue skies, its rocky cliffs, its plutocratic villas looking down upon an azure sea….”

Yes, and oil derricks too. ds

This entry was posted on November 26, 2013 by simanaitissays in Just Trippin' and tagged Burton Holmes Travelogues.