DID THE earth move for you too? On July 24, 2014, my home field, John Wayne Santa Ana Airport, SNA, will change its busiest runway from One Niner Right to Two Zero Right.

Realigned concrete? No. A realigned Earth.

There are two North Poles, the geographic one and the geomagnetic one. The geographic North Pole, the top of a globe, shifts ever so slowly with movements of the Earth’s tectonic plates.

Ellesmere Island is in the Canadian territory of Nunavut, part of the Queen Elizabeth Islands.

The geomagnetic North Pole, the one that determines compass readings, is currently on Ellesmere Island in northern Canada, at 80.08 degrees North, 72.21 degrees West, and moving westward at about 40 miles per year.

This change will be reflected in new numbers on the runway and other airport signage, new Air Traffic Control designations and updated listings in navigational aids and other documentation. Coordinating all this, the official change will occur overnight on July 24, 2014 in conjunction with publication of Federal Aviation Administration charts.

This happens to every airport from time to time. Though not inexpensive (the SNA change is contracted for $159,100), it’s considered pretty much a non-event among specialists. 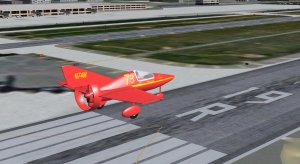 However, Tampa International Airport officials remember otherwise. Back in 2011, Tampa renumbered its runways. Keeping its public informed, airport officials included a paragraph about the change in a routine press release.

Intended purely as an interesting fact, the change was picked up by CNN and then went viral. Some folks just knew it was the beginning of the Apocalypse; others sensed a vast government conspiracy. 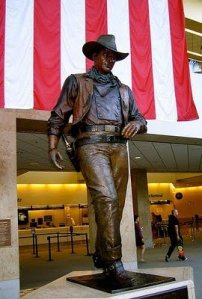 A familiar figure struts in front of SNA. Image from www.usa305.blogspot.com.

Things here at Santa Ana should be less crazy. After all, SNA is watched over by the “Duke.” ds