OUR MOON is more familiar than any other celestial object, yet there are still plenty of puzzles. For instance, how—and why—did the moon come to be? An article, “Impact Theory Gets Whacked,” by Daniel Clery in Science magazine, October 11, 2013, raises this question. And, to me, the article also offers an excellent parable on how science works.

The Giant Impact Theory has been a long-standing hypothesis on how the moon was formed: Early in the life of the solar system, an errant planet struck Earth a glancing blow. This planet was about the size of Mars (1/9 as massive as Earth), and took the worse of it.

The Giant Impact Theory suggests the moon arose from a collision of Earth with a Mars-sized planet. Image by Fahad Sulehvia http://www.novacelestia.com from Science magazine, October 11, 2013.

Earth reformed itself; the other planet was destroyed. But debris settled into an orbit around Earth to become our moon.

The Apollo moon visits, 1969-1972, corroborated this theory. The 842 pounds of moon rock brought back by astronauts displayed a chemical similarity to Earth.

Another means of assessing this is by comparing the isotopes of oxygen contained in the Earth, moon and meteorites coming from different parts of the solar system. It’s hypothesized that the ratios of oxygen-16, oxygen-17 and oxygen-18 can be used as markers for tracing origins. Generally, isotope ratios change progressively with distance from the sun. And the isotope plotting of Earth and moon are identical.

Uh, no. As should oft be remembered, science is never over. According to Science, increasingly sophisticated rock analyses and computer models of impact suggest that “reality was messier than anyone expected.”

Each of these moon-producing scenarios leaves questions. Image by G. Grullón from Science, October 11, 2013.

A shortcoming of the standard Giant Impact Model lies in the homogeneity of Earth and moon. The latest computer modeling indicates that the moon should be predominately impactor-related. And to assume the errant planet was chemically similar to Earth prior to the collision is a bit much for many scientists.

A second model, Fast-spinning Earth, grants a chemically different collider and yields a homogeneous Earth and moon. But it requires a smallish errant planet, perhaps only 1/200 as massive as Earth, moving at high speed and impacting a fast-spinning Earth. Its shortcoming is dealing with all the increased dynamics and angular momentum (twice the Earth/moon pair’s today).

There is a process called “evection resonance” involving cyclic dynamics of the sun, Earth and moon. It’s thought that such evection could explain the measured loss of angular momentum.

A third model, the Half-Earth Impact, posits the opposite of the second one: two colliding planets of similar mass, their resulting Earth/moon pair chemically identical but having no particular likeness to their predecessors. This theory also results in a great deal of angular momentum—and still needs evection to slow down.

Some scientists doubt that evection resonance is the key. And, in any event, neither the second nor third theory hardly hones Ockham’s Razor.

It was William of Ockham who preferred economy and succinctness in explanation, the simple as opposed to the Rube Goldberg.

Yet another possibility is that the hypothesis of oxygen isotope ratio is wrong. Remove this constraint, and it’s no longer improbable that the errant collider and Earth shared chemical similarities.

How to test the hypothesis of oxygen isotope ratio?

One way is by examining the oxygen isotope ratio of a rock from Venus. 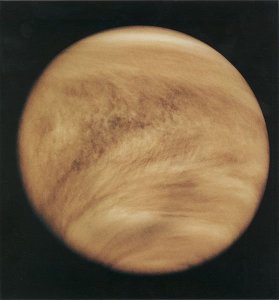 Venus, as seen by Pioneer Venus Orbiter, 1979. Image from NASA.

This in itself is quite a challenge, as no Venus probes have been designed to return. Venus is one helluva place, with temperatures approaching 1000 degrees Fahrenheit and atmospheric pressures 92 times those of Earth. What’s more, its strong gravity precludes Venusian chunks being lofted into space and brought down to Earth as meteorites.

The science isn’t over. ds

This entry was posted on October 29, 2013 by simanaitissays in Sci-Tech and tagged AAAS Science magazine, Daniel Clery, Impact Theory Gets Whacked, origin of the moon.