ON OCTOBER 14, 2013, The International Herald Tribune, the Trib, for short, changed its name to The International New York Times. It wasn’t the first name change, but it’s fun to celebrate the heritage of this iconic reading matter for ex-pats and international travelers, myself included.

Tracing way back, a European edition of The New York Herald was established by its owner, James Gordon Bennett, Jr., in 1887.

James Gordon Bennett, Jr., 1841-1918, got the newspaper gene from his father; other passions were uniquely his own.

Gordon Bennett, as he was known, lived the good life with yachting as well as passions for automobile and air racing. The James Gordon Bennett Cup was an international air competition held 1909 through 1913 and in 1920. See www.wp.me/p2ETap-17V for a tale of this last event.

Gordon Bennett was rather a rake. In 1877, he left New York City for Paris after a scandal ended his engagement to socialite Caroline May. Did he mistake the grand piano—or was it the fireplace—for a urinal? Opinions differ.

For a while there, the Brits had the expletive “Gordon Bennett!” to describe any particularly outrageous behavior.

The Paris Herald continued to flourish after Gordon Bennett’s death in 1914. This newspaper kept the ex-pat Lost Generation from being completely lost from American goings-on in the 1920s. Over the years, it had several names; in 1967 it became The International Herald Tribune.

I suspect I read my first Trib when I lived in the Caribbean, 1969 to 1976. This was long before anything resembling satellite communications. Local radio was just that, local. St. Thomas TV, which ran only afternoons and early evenings, depended on air-freighted tapes for other than its local content. Newspapers like the Trib offered hard news as well as international culture.

Later, when I was traveling with Road & Track, the Trib continued to enrich my culture—after a fashion.

A Trib article long ago described a trio of young ladies, all three playing cellos, doing something akin to classical/hard rock/performance art. 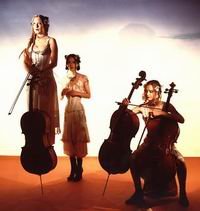 And so it was in Paris I bought Thanks for the Ether, my first Rasputina CD. Others were to follow.

Later, another cultural item in the Trib introduced me to the Eroica Trio, three more young ladies, these playing piano, violin and cello.

And I haven’t even told you about Carpe Diem Quartet’s CD Montana, the pieces composed by its violist Korine Fujiwara, another real dish.

Carpe Diem. Violist Korine Fujiwara is at the right.

But I stray from the Trib. 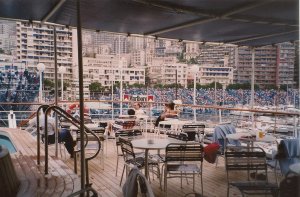 Monaco Grand Prix, any one of several years during the 1990s. This was my breakfast view aboard the Renaissance V cruise ship.

This entry was posted on October 19, 2013 by simanaitissays in I Usta be an Editor Y'Know and tagged Carpe Diem, Eroica Trio, Monaco Grand Prix, Rasputina, The International Herald Tribune.