THERE HAVE been lots of automotive journalists over the years, but Tom McCahill was one of a kind. He more or less invented the U.S. road test and certainly enriched its vernacular. He was highly articulate, a highly skilled driver and highly opinionated. 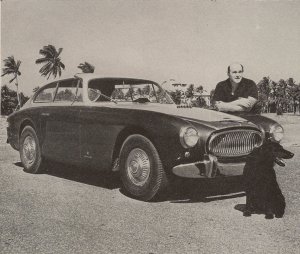 Tom was born into wealth, though the Depression and his father’s alcoholism wiped out the family fortune by his early adulthood. In February 1946, he pitched Mechanix Illustrated magazine the idea of regular automotive articles. MI tried the idea and its circulation soared. Twenty-five years late, February 1971, MI celebrated by putting Tom’s image on its cover.

“Uncle Tom,” as readers called him, continued with MI, ironically enough, even after his death in 1975. For a time, the magazine continued his column “McCahill Reports,” ghostwritten by his assistant Brooks Brender (stepson by way of his fourth wife).

Perhaps many of us have old MI mags boxed away somewhere, but Tom also wrote three books, the best of them The Modern Sports Car.

“What is a sports car?” is the book’s first sentence. No less than John R. Bond of Road & Track asked the same question at about the same time (see www.wp.me/p2ETap-tX).

Tom’s views were often framed in the negative—“What isn’t a sports car?—tied in with his distrust of “the typical Detroit product… designed for tender-bottomed dowagers….”

Not that he was utterly pig-headed on the matter: “When driven within reason, and within its capable limits, the American car is one of the finest utilitarian vehicles in the world, if not the finest.” To many drivers, he noted, they’d “be as happy about it as an oyster living under the dock of a cornmeal mill.”

Sports cars, of course, were for sportsmen (forgive the 1950s gender focus). And Tom clearly met that definition, with hunting, fishing, boating and deep-sea diving among his hobbies. He dedicated The Modern Sports Car to Joe, his late black Labrador often seen in MI road test photos.

Tom gave us the finest automotive metaphors ever written (so good that others have blatantly stolen them). Of the 1957 Pontiac’s ride, “it’s as smooth as a prom queen’s thighs.” Of Carroll Shelby’s 1960s Cobra, the car was “hairier than a Borneo gorilla in a raccoon suit.”

It’s no big deal that gorillas are indigenous to Africa, not Borneo. I doubt if I knew this back then, and I didn’t care. Nor did I know much about a prom queen’s thighs.

But I was learning about sports cars, and Tom was a great teacher. 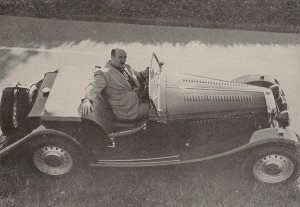 His writing wasn’t all fluff either. Tom was a student of automotive history: “The British Intelligence Service was, in my opinion, extremely smart to move in immediately when the war was over to gather all technical material during Germany’s darkest hour.” He goes on to discuss the Third Reich’s active involvement with Grand Prix racing during the 1930s and the engineering achievements at Mercedes-Benz and Auto Union.

The book is well illustrated with photos of sports cars of the era.

The traditional Le Mans start, 1953. The white cars with hood stripes are Cunninghams, American cars that McCahill considered among the world’s best. Images from The Modern Sports Car. 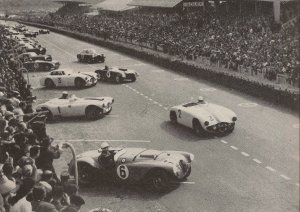 It’s a real treat that Tom attended the 1953 Le Mans race and took his camera.

Unaddressed in the book—it was written in 1954—is a wealth of apocryphal McCahill: Had he lost a leg that became gangrenous after a thorn puncture on a duck hunt? Was he really the last living descendant of Scottish highwayman Rob Roy? Did he once fight off a trio of GM goons—two sent to the hospital and the third running away?

This entry was posted on September 28, 2013 by simanaitissays in Classic Bits, I Usta be an Editor Y'Know and tagged Mechanix Illustrated, The Modern Sports Car, Tom McCahill.