THE RIGHT STUFF, THE WRONG WAY

AN IRASCIBLE Douglas Corrigan wanted to fly the Atlantic solo in the mid-1930s. However, federal officials looked at his clunker of an airplane and said no. 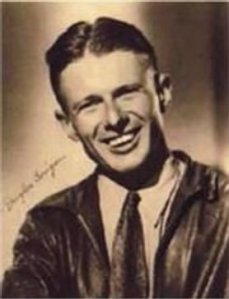 The officials had good reason too. Corrigan’s Curtiss Robin was a 1929 model originally powered by an already ancient 90-hp Curtiss OX-5 (see www.wp.me/p2ETap-rz). Corrigan had swapped it with a 165-hp Wright Whirlwind assembled from parts and repaired the rest of the aircraft with patchwork fixes, but fat lot of good it did him.

The original Robin carried 50 gal. of fuel; Corrigan installed five additional tanks. True, they completely blocked his forward vision, but Corrigan’s idol Charles Lindbergh had the same challenge on his 1927 New York/Paris flight in the Spirit of St. Louis.

Corrigan was an able mechanic. One of his earlier jobs had been at Ryan Aeronautical Company in San Diego, where he fabricated the wing assembly, gasoline tanks and instrument panel of Lindbergh’s airplane.

However, the Lindbergh craft was state-of-the-art for its era; Corrigan’s Robin was an old crate, cobbled together by a talented adventurer.

In 1935, Corrigan sought permission for a transatlantic flight from the U.S. Bureau of Air Commerce. The BAC said no, but certified the airplane to a lower standard for cross-country flying.

On July 17, 1938, Corrigan fired up the Curtiss Robin, took off from Floyd Bennett Field in Brooklyn, New York, ostensibly on his way back to Long Beach, California—and, instead, rose into a cloudbank and headed east.

“I must have read the compass backwards,” was one of his comments. 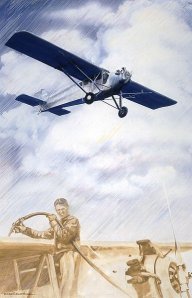 An unamused BAC promptly suspended his pilot’s license, though, according to Corrigan’s 1995 obituary in The New York Times (http://goo.gl/MhPMqX), he served the entire suspension during his sea voyage back to the U.S.

Corrigan’s celebrity continued. He wrote That’s My Story, published in time for the 1938 Christmas market. He endorsed a Wrong Way Corrigan wristwatch that, naturally, ran backwards. Within a year, RKO Radio Pictures paid him $100,000 for rights to his book for The Flying Irishman, starring no less than Douglas Corrigan. (See http://goo.gl/MzeA4L.) 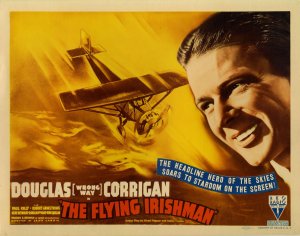 As a bit of Hollywood trivia, one of the screen writers for The Flying Irishman was Dalton Trumbo, later to get blacklisted for his defiance of the House Committee on Un-American Activities.

Corrigan flight-tested bombers and flew in the Ferry Command during World War II. He retired from aviation in 1950 and bought an orange grove in Santa Ana, California. Corrigan claimed he knew nothing about raising oranges, but learned by watching his neighbors.

Most of the grove was sold for development in the 1960s; Santa Ana has a street in the area named in Corrigan’s honor.

Corrigan kept his disassembled Curtiss Robin in his garage. He became a recluse after a son died in a 1972 air crash, but Corrigan was encouraged back into the public eye in 1988, the 50th anniversary of his epic flight. There’s a video of this celebration at http://goo.gl/yX1kzD.

In the video, Corrigan recalled one of the many officials he had pestered decades ago. “He was pleasant about it,” Corrigan remembered, “but the last thing he said was, ‘Get lost!’”

4 comments on “THE RIGHT STUFF, THE WRONG WAY”

This entry was posted on September 26, 2013 by simanaitissays in Vintage Aero and tagged Douglas Wrong Way Corrigan, Santa Ana California.