CARS AND THE ‘BURBS

SOME OF those into social engineering delight in disparaging the automobile and its suburban environment. From whatever their view—a luxury midtown loft?—they want to shame us out of the ’burbs and onto public transportation.

I beg to differ.

I offer three interesting books more or less corroborating my point of view—and life style. All three book are listed at www.amazon.com and www.abebooks.com. 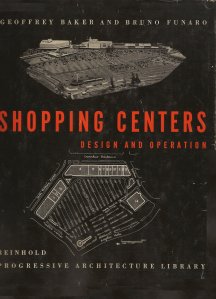 The oldest of the three books, Baker and Funaro’s describes something we suburbanites take for granted today: the shopping center. The first quarter of the book is a 1951 design manual. Why, how and where to establish a multiple retail venue. What layout: a strip mall, a U, a rectangle?

The rest of the book is illustrative and nostalgic. Details and photos are given of 63 shopping centers, large and small, around the country at the time of the book’s 1951 publication.

The Country Club District of Kansas City, Missouri, started in 1908, is cited as a pioneering integration of homes and stores. Baker and Funaro note that its inspiration was the utopian Garden Cities concept its developers had seen in England (http://goo.gl/lpNyT). 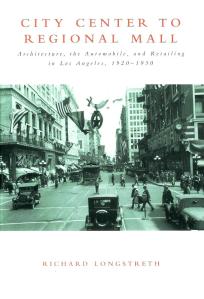 Richard Longstreth is a professor at George Washington University with a special interest in historic architectural preservation.

City Center to Regional Mall offers the view that Los Angeles did for the shopping center what New York City and Chicago did for the skyscraper. What’s more, the region’s scattered development was ideal for the automobile—and vice versa.

Longstreth writes, “…the trend has generated reactions ranging from advocacy to derision. However the results are viewed, there can be no question that the modern metropolis is very different from that of even a half-century ago and that these changes will have a basic impact for decades to come.” 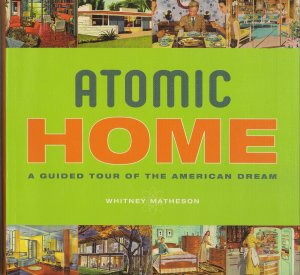 Whitney Matheson’s book celebrates both the nostalgia and cultural history of the ’burbs. She begins with post-World War II America and a real-estate developer named William J. Levitt.

Does “Levittown” ring a bell?

Levitt popularized the concept of prefabrication in home building. Whereas others were putting up three houses a day, his suburban Long Island locale grew at the rate of 30 homes a day.

Matheson observes that, in a single day of 1949, 1400 new home contracts were signed. Eventually, Levittown, New York, had 17,000 homes. Before long, other Levittowns appeared in Pennsylvania and New Jersey.

Reflecting the times, many suburbs of the 1950s were segregated. And their prefabricated construction didn’t foster individuality.

For many, though, suburbia was—and continues to be—a damn sight better than a city ghetto. Even with that daily commute by car. ds

This entry was posted on September 16, 2013 by simanaitissays in And Furthermore... and tagged Atomic Homes, City Center to Regional Mall, Shopping Centers Design and Operation, Suburbia.