JAPANESE BREAKFAST is the best breakfast in the world. It’ll have steamed rice, nori (dried seaweed, for dipping in a tad of soy sauce and making little rice rolls), miso soup, tamagoyaki (a rolled omelet with a touch of grated daikon radish), several side dishes of Japanese veggies, tsukemono (chopped assorted pickles) and a piece of broiled fish.

Less elegant Japanese breakfasts—but no less pleasurable—are served in the many little restaurants of the jōgai-shijō, the outer market of Tokyo’s Tsukiji Fish Market. The best time is before 7:00 a.m., after touring the jōnai-shijō, the inner market of this vast facility. It’s easy to work up an excellent appetite, because the best touring starts at 5:00 a.m.

Increased tourist traffic makes today’s Tsukiji visit a bit more complicated than in the old (pre-Fukushima) days, when these photos were taken. Check out http://goo.gl/RQqrbx for current tourist restrictions.

Tsukiji Fish Market owes its presence to an earlier quake, the 1923 Great Kanto Earthquake that destroyed much of Tokyo.

Edo’s original fish market remained in business from the 1500s until 1923. Image from www.tsukiji-market.or.jp.

The earlier market destroyed in 1923 dated from the 16th Century when the shogun Tokugawa Ieyasu encouraged fishermen to bring their wares to Edo, then the name for Tokyo. (See www.wp.me/p2ETap-GZ for Tokugawa lore.)

Today, Tsukiji Fish Market is the largest of its kind in the world. Each day, more than 2500 tons of marine products pass through this huge market. There’s even an entire gallery dedicated to tuna flash-frozen aboard the fishing boats.

By 3 a.m., boats are unloaded and frozen tuna are available for inspection by bidders.

Prospective bidders work through the gallery with flashlights, gaffs and special knives for a tiny taste as they make their selections.

Each frozen tuna is numbered, and a portion of its tail is the deciding factor for prospective bidders.

Rapid-fire auctions start at 5:30 a.m. Often by 7:00 a.m. the auctions are completed. The fish are carted off to middlemen with stalls at the market or to trucks transporting them throughout Japan. 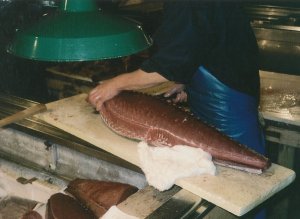 This man begins the transformation of a tuna flank into marketable pieces.

More than 450 different kinds of fish are available at the Tsukiji stalls. Each is priced, labeled, boxed and transported around by guys piloting miniature forklifts at a devilish pace.

Some of the products are identifiable as fish; others as shrimp; others as mysterious sea creatures.

Around the periphery of the buildings are other stalls selling produce and products of all sorts.

I could only guess on a lot of these.

There are stalls specializing in knives, steamers, baskets and other cooking paraphernalia. At one, I bought a high-sided wooden pan used to prepare rice for sushi. 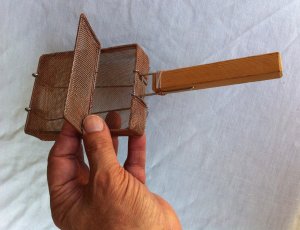 Guess what this is for.

At another, I found a neat little basket for toasting sesame seeds.

Later, at breakfast, I got to use my sukoshi Nihon-go (meager Japanese) with the charming young lady a couple stools away from our group.

This entry was posted on September 15, 2013 by simanaitissays in Just Trippin' and tagged Japanese Breakfast, Tokyo Tsukiji Fish Market.