WHAT WONDERFUL times they must have been: the vintage years of Paris, Berlin and Hollywood. Following World War I and even into the Great Depression of the 1930s, these three cities were filled with art, literature, music and talented people.

Here, I describe three neat books on this.

The Jazz Age in France, by Charles A. Riley II, Harry N. Abrams, 2004. This and the two others are listed at both www.amazon.com and www.abebooks.com.

Paris had tradition, heritage and post-World War I prices. It offered enthusiastic acceptance of American Jazz—and, not incidentally—Americans of color. The Revue Négre arrived in Paris in 1925 with Josephine Baker, whose exotic dancing became quite the rage at the Théâtre des Champs-Elysées.

Paul Colin’s posters of Josephine Baker made him the new Toulouse-Lautrec of recording Parisian nightlife. Image from Jazz Age.

According to Riley, the decor of songwriter Cole Porter’s Paris apartment was “as far ahead of its time as Cole’s lyrics.”

Cabaret, the concept of intimate revues of sophisticated musical theater, reached its height in vintage Berlin. And the book Cabaret Berlin is a bibliophile’s—and music lover’s—celebration of this. 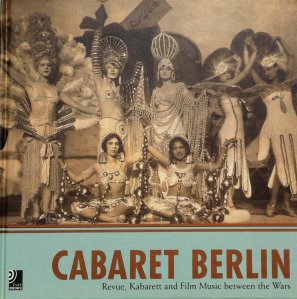 Archival recordings of music of the era are contained on four CDs, part of Cabaret Berlin. Performers include Marlene Dietrich, who began with gigs as an orchestra violinist, later to achieve fame through Josef von Sternberg’s The Blue Angel. For an idea of this 1930 flick, see http://goo.gl/JH5Hxe.

The times in Berlin were complex for these Cabaret songwriters because many had Jewish heritage. As the 1930s evolved, the fortunate ones managed to elude the Nazis—and several of them ended up in Hollywood. 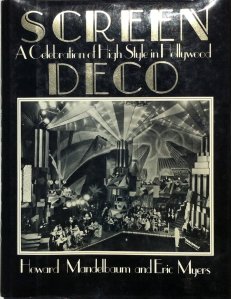 “In the twenties and thirties,” note the authors of Screen Deco, “Hollywood was at its most extravagant.” The term “Art Deco” was coined in response to the Musée des Artes Décoratifs at the 1925 Paris Exposition. Its evolution into Streamline Moderne celebrated a fusion of Twentieth Century art and technology. 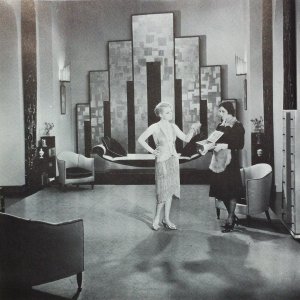 Anita Page in Our Dancing Daughters, 1928. Image from Screen Deco.

Movie set designers quickly caught on to the trends. Especially in the Great Depression, moviegoers wanted to dream, and they were given plenty of opportunity.

Busby Berkeley girls “By the Waterfall” from the movie Footlight Parade, 1933. Image from Screen Deco.

Busby Berkeley brought cinematographic wizardry to musicals. He was renowned for employing a single camera, but one that moved artfully through elaborate sets. In fact, his famed overhead shots made Art Deco images of the choreography itself.

Paris, Berlin, Hollywood. There was magic to be had in each of these. ds

This entry was posted on September 5, 2013 by simanaitissays in I Usta be an Editor Y'Know and tagged Art Deco, Cabaret Berlin, Jazz Age in France, Screen Deco, Streamline Moderne.