THE CONCEPT of a continuously variable transmission, CVT, for short, has been around for years. There have been several variations on the theme and a good number of applications. In fact, today one automaker is particularly committed of the idea.

As its name implies, a CVT offers a stepless variety of ratios, infinitely many between a minimal and maximal value. Ideally, its engine can be operated in its most economical range at any corresponding road speed.

An early variation of this, disc friction drive, was a feature of several automobiles, among them, the Lambert and Metz. With each, the engine drove a large drive disc, against which another driven disc acted perpendicularly.

The driven disc could be moved laterally, thus mating with drive disc circumferences of lesser or greater dimensions and giving stepless change of ratio.

The Metz, c. 1908 to 1922, had several models with “gearless” transmissions. Image from Jack Tuttle.

The driven disc was splined to a lateral driveshaft that, in turn, connected to the rear wheels by chain.

The Ner-a-Car motorcycle, built between 1921 and 1927, also used friction drive. Like later CVTs, it had fixed indents of its drive to yield five pre-set “gears” rather than a full range of ratios.

Generally, slippage and wear were shortcomings of disc friction drives.

More recent CVTs have been of two principal types, variable-diameter pulley or toroidal roller-based. Conceptually, each exploits differing diameters of elements that can be continuously varied. 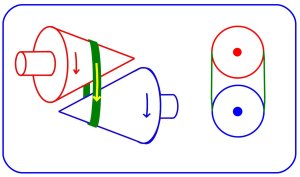 This extreme gives the CVT its higher numerical ratio, its lower “gear.”

One of the earlier of modern designs, the 1958 DAF, used a rubber belt in tension. Later evolutions changed the belt to a metal chain and its operation from tension/pull to compression/push.

This belt positioning gives the CVT its lower numerical ratio, its higher “gear.”

The 1987 Subaru Justy had a CVT. A tidy little two-box available with all-wheel-drive, the Justy was just the thing for stowing next to one’s snow blower. However, it was also renowned for its “motorboating,” the propensity of basic CVT cars to operate disconcertedly at constant engine rpm despite varying road speeds.

Among other automakers, Audi mitigated this motorboat feel by incorporating faux “gears” into its CVTs (along the lines of the Ner-a-Car 70 years before).

By the way, Toyota achieves continuously variable ratios of its hybrids’ Power Split Transmission, but in a manner that’s entirely different from these CVTs discussed here. Briefly, PST exploits a planetary or epicyclic gearbox’s operation in an untraditional way. A classic epicyclic gearbox gets its differing ratios through selective locking of its carrier, sun or planetary gears. Instead of stationary locking, PST selectively powers these elements, all under computer control, thus yielding a continuous spectrum of ratios.

Other automakers have continued development of conventional CVTs. Nissan, in fact, has been the most aggressive of these.

Left to right, Nissan Versa, Murano and Maxima, all with CVTs as their automatic transmissions.

Nissan designed its own CVT of toroidal configuration, one intent being acceptance of higher torque inputs. Gradually, its XTronic CVT has become the automatic transmission of choice throughout the Nissan range. Everything from the Versa to the Maxima is CVT-equipped, all in the interest of Nissan’s Green Program 2016.

One Nissan goal is improving fuel economy of its internal-combustion cars by 35 percent compared to 2005 figures. A next-generation XTronic is seen as crucial in achieving this, with cumulative sales of 20 million CVT-equipped vehicles.