A WINGED armada of 24 Savoia-Marchetti SM.55X flying boats transported Italo Balbo and his 96 colleagues in their mass flight from Orbetello, Italy, to the 1933 Chicago World’s Fair (www.wp.me/p2ETap-1q1). One of the more successful designs of Ing. Alessandro Marchetti, the twin-hulled SM.55 made aviation history from its 1924 debut well into the 1940s. 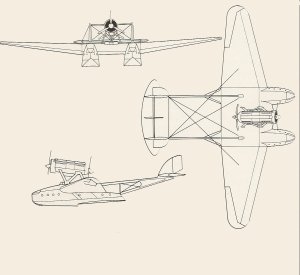 The SM.55 was originally planned as a torpedo bomber/mine layer. Cargo, fuel and any passengers were accommodated in its twin hulls. The pilot, copilot and crew resided in its thick wing section between the hulls. Originally open-cockpit, the SM. acquired wider, deeper hulls and an enclosed flight deck by 1930. 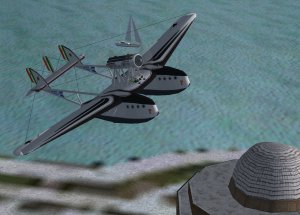 The SM.55X was a variant powered by twin counter-rotating Isotta-Fraschini Asso 750 engines, one operated tractor fashion, the other pusher, both angled on struts above the center wing panel. (This mounting permitted in-flight maintenance by an intrepid mechanic.)

The Asso (Ace) 750 was a liquid-cooled 18-cylinder of broad-arrow layout (see www.wp.me/p2ETap-1lR for another such design). The Asso featured double overhead camshafts for each of its three banks, four valves per cylinder and produced 830 hp. 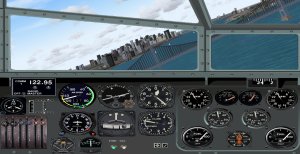 A view from the SM.55X flight deck of the George Washington Bridge and New York City skyline.

The flight deck was not particularly spacious, but fully equipped with instrumentation of the era. Italo Balbo commanded the mass flights from the lead Squadriglie Nere (Black Squadron) aircraft. Crews of each SM.55X consisted of four, two officers at the controls and two enlisted men serving as mechanics. 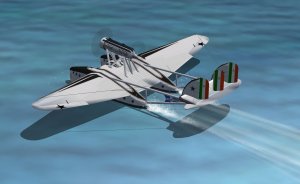 The black and other trim identify this as Italo Balbo’s command SM.55X.

There were crew accommodations within the hulls as well. In fact, civilian versions of the SM.55 carried as many as 11 passengers there given somewhat larger viewports.

In 1926, the SM.55 set 14 records for speed, altitude and distance. A Brazilian crew flew the Atlantic in 1927. A year later, Italo Balbo undertook a Western Mediterranean Cruise with 61 seaplanes, nine of which were SM.55s. This was followed in 1929 by an Eastern Mediterranean Cruise, almost a sales trip, that visited Greece, Turkey, Bulgaria, Romania and the Soviet Union. SM.55s were the predominant aircraft.

In 1930, Balbo led a South American Cruise with yet another enhancement of the SM.55. One design change was sealing off the flight deck from the fuel tanks—so that the crew could safely smoke. There’s a jaunty Italian video of this flight at http://goo.gl/CjP7he.

Last, in 1933 came the SM.55Xs’ Crociera Aerea Del Decennale, the Decennial Aerial Cruise celebrating the 10th anniversary of the Italian Air Force. This visit to the Chicago World’s Fair was the longest and most difficult of Balbo’s mass flights.

Its highlights are given, albeit in Italian with more than a few Fascist overtones, on a video at http://goo.gl/x6CNLh. The straight-arm salutes and 14 minutes are more than balanced, though, by scenes of Balbo wearing his Sioux headdress. ds

This entry was posted on August 18, 2013 by simanaitissays in Vintage Aero and tagged Isotta-Fraschini Asso 750, Italo Balbo, Savoia-Marchetti SM.55X.