WITH MORE and more drivers never learning the knack of operating a clutch, Bosch has come to their rescue with something it calls the eClutch. Briefly, it incorporates an electrically operated pump between the driver’s left foot and the clutch release.  No longer need neophyte drivers stall nor overrev on getting underway.

This gizmo, possibly already with automaker customers, is worthy of note.

I’m confident that our crowd can all drive manual-transmission cars. And by this I don’t mean some fancy-schmancy two-pedal manu-matic that lets you pretend you’re Kimi Räikkönen in performing flawless downshifts. (That’s a computer accomplishing this, not you.)

If there are only two pedals, don’t take credit for the shift.

There is art in even the most ordinary bits of three-pedal driving, starting smoothly on a hill, performing a neat (albeit unnecessary) heel-and-toe downshift or doing a little burnout, just for the hell of it.

I recall teaching daughter Suz to drive, by her choice in a stick-shift car. I drew her a rudimentary sketch of a spinning disc being brought against a stationary one, the point being to get the second one gradually spinning.

Hardly great art, but it helped daughter Suz understand what her left foot was accomplishing.

From the onset, Suz got it right, and she’s a smooth and confident shifter to this day. (Most of the time, she drives an automatic car, but she also has her 5-speed Miata.)

Our expertise, though, might be growing arcane, akin to manually setting the spark advance of one’s car (as everyone did, back in the old, old days).

The trend is clear. The first automatic transmission, GM’s Hydra-Matic Drive, appeared on the 1940 Oldsmobile and, a short time later, the 1941 Cadillac. By 1957, 83 percent of cars sold in the U.S. were automatics.

It’s about 95 percent now. However, in an annual market of 14 million cars, this still leaves 700,000 with manual gearboxes.

A percentage of these have manuals for reasons of high performance; others, by dictates of fuel economy or price. A look at the government’s Model Year 2013 Fuel Economy Guide shows an interesting array of choices. See http://goo.gl/ctnB5.

The Fiat 500 above enhances fuel economy, not to say sportiness, through a manual gearbox choice. With the Ford Fiesta below, it’s a wash. 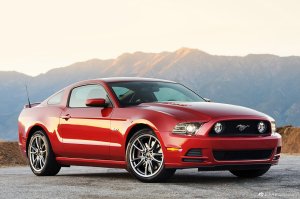 With the Ford 5.0-liter Mustang, it depends on what, how, and where you drive.

Ford’s Mustang displays high-performance calibrations in other than gearbox choice: With a 6-speed automatic, its 5.0-liter V-8 gets 18 mpg/25 mpg, City/Highway. Teamed with a 6-speed manual, the same engine gets less in the city, 15 mpg, but more on the highway, 26 mpg.

No, there are no burnouts on the EPA City Cycle.

Alas, nor would there be any with the Bosch eClutch system. So, as recommended by Crosby, Stills, Nash and Young, “Teach Your Children Well.” ds

This entry was posted on June 26, 2013 by simanaitissays in Driving it Today and tagged Bosch eClutch, learning to drive a stick.