THERE’S A rich history documenting the Schneider Trophy, seaplane races held 11 times between 1913 and 1931. It began in Monaco and was to end—somewhat ignominiously—off the Isle of Wight, near Portsmouth, England. In between, other racing venues for these most advanced aircraft of their day included Venice, Naples, Baltimore and Hampton Roads.

Here, I’ll offer Part 1 of an overview of this exciting and technically fascinating competition. Individual aircraft technicalities may appear in future mini-essays. 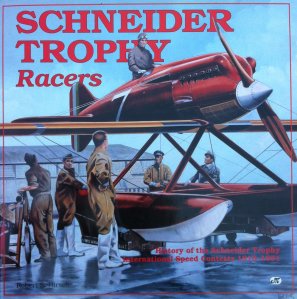 A standard book on the subject: Schneider Trophy Racers, by Robert S. Hirsch, Motorbooks International, 1992. Both www.amazon.com and www.abebooks.com list it.

The Coupe d’Aviation Maritime Jacques Schneider was one of four principal competitions held at the Grand Prix d’Hydroaeroplanes de Monaco in mid-April 1913. French financier and aviation enthusiast Jacques Schneider set a prize of 25,000 francs ($5000 then, about $117,000 today) and a trophy, a statuette of bronze and silver on a base of dark-veined marble.

For a long time, the Schneider Trophy resided in the Royal Aero Club, London. Today, it’s in the British Museum. Image by Trounce.

In these earliest days of aviation, air racing was largely a privateer’s sport, and a rich man’s resort like Monaco made completely good sense. Subsequently, each winner got to select the venue of the next year’s competition. A French Deperdussin took the 1913 event at an average speed of 45.71 mph, one of the race’s multiple tests a taxiing across the water for 5 km.

The 1913 Schneider Trophy circuit had its start/finish in Monte Carlo, with turnarounds at Beaulieu-sur-Mer, France, to the west and San Remo, Italy, to the east. Image from Schneider Trophy Racers.

The second event, held again in Monaco, was even more ambitious. In a precursor to the Monte Carlo automotive rally, contestants started from several optional points, the nearest being Milan (at around 190 miles), the farthest being London (about 875 miles), the differences being adjusted in laps of the Monaco course.

A British Sopwith Tabloid won the 1914 Schneider Trophy at 86.83 mph. Before the winner’s choice of Bournemouth, England, could be honored as the next venue, World War I intervened.

Bournemouth 1918 was a shambles—and a foretelling of jingoism to occur in 1931. Fog complicated the organizers’ starting assignments. Maybe contestants were informed of changes; maybe they weren’t. Spectator rowboats strayed into takeoff paths. Five of the six competitors ended up on various beachheads around the circuit. 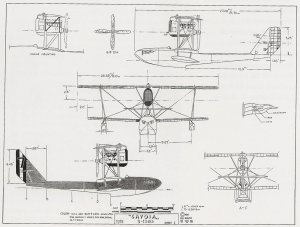 Meanwhile, a plucky Italian, Sgt. Guido Jannello, piloted his Savoia S.13 with disconcerting regularity. He completed 11 laps (probably one more than necessary) and set down smoothly. His team recommended he do another as a safety; he ran out of fuel on this one and was lost for a while in the mist and fading light.

Sgt. Guido Jannello is towed to the beach at Bournemouth. Had he won? Image from Schneider Trophy Racers.

When towed back to Bournemouth, Jannello was told he had been disqualified for rounding the wrong marker boat. (There had been an extra one anchored alongside the course.) Given that his was the only aircraft still flying, organizers declared the 1918 Schneider Trophy contest void.

Needless to say, all hell broke loose. The Aero Club of Italy complained; the Brit Royal Aero Club acquiesced by awarding the trophy to the Italians and the 25,000 francs to Jannello. But the Fédération Aéronautique Internationale later rejected the gesture and agreed with the organizers in ruling the contest void.

As a concession, the FAI gave choice of venue to the Italian club for the 1920 Schneider Trophy.

To be continued tomorrow, with neat technicalities, clever aero maneuvering and a show of sportsmanship. ds

This entry was posted on June 15, 2013 by simanaitissays in Vintage Aero and tagged Monaco, Savoia S.13, Schneider Trophy racers.