TODAY’S RACE drivers—especially those in the lofty realm of Formula 1—have evolved into specialists who possess intellect as well as athleticism. They’re closer to astronauts than they are to race drivers of only a couple of generations ago. 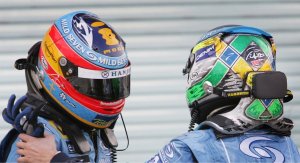 It’s curious that the breed took this long to evolve.

The automobile and the airplane originated within a decade of each other. 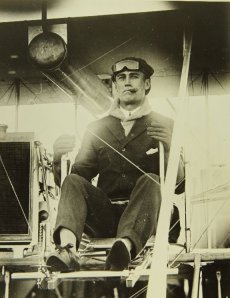 Aviation pioneer Cal Rodgers recognized that “a good cigar is a smoke,” even when it’s near a gasoline tank.

In the early days, a record-setting flyer like Cal Rodgers (www.wp.me/p2ETap-iE) had a direct counterpart in race driver Barney Oldfield—even to their cigars being smoked next to fuel tanks of gasoline.

Yet by the end of World War I, pilots seemed to swap the gallantry of their craft for its technicalities.

The first transatlantic and transworld flights were anything but romantic. The Navy-Curtiss crews in 1919 (www.wp.me/p2ETap-Ol) had a flotilla of 22 destroyers providing radio guidance and communication across the Atlantic. The 1924 Douglas World Cruisers (www.wp.me/p2ETap-vh) had extensive U.S. Army Air Service support at locations around the world before their first takeoff.

Even Charles Lindbergh had a year of flight training with the Army Air Service and spent another year flying U.S. Air Mail before his 1927 achievement of flying solo from New York to Paris. In his book, We, Lindbergh wrote of the importance of developing the necessary expertise. He was “The Lone Eagle,” but he was no amateur.

By contrast, well through the 20th Century, race car drivers remained at best sportsmen and fun-loving sorts, at worst a bunch of roughhouses with money—and, more than a few of them, thicker than a brick.

It’s easy to recognize the sportsmen; Briggs Cunningham comes immediately to mind. The fun-loving sorts include wonderful personalities such as Innes Ireland. I suspect you know of some belonging to the other extremes.

Ayrton Senna was the most cerebral driver of his era, maybe of all time.

And, like Senna, today’s drivers are all technically superlative as well as physically capable of a demanding occupation. Modern race drivers experience g-loads approaching those common to high-performance pilots. Thus far, drivers are withstanding these loads in Nomex and HANS devices, not g-suits. Yet their kit is a far cry from the polo-helmet/short-sleeve sport-shirt/stringback-glove era of only a generation or two ago.

Ferrari offers this example of the evolution in Formula 1 steering wheels, 1963-2008.

Look at a modern F1 steering wheel and you get an appreciation of the mental agility required while the driver is part of the controlled fury of a race. Think of the subtleties of tire conservation, DRS use, pit and overall race strategy. The car-to-pit communication in modern F1 is akin to the language of air traffic control, cool and precise.

It’s only when the checkered flag is passed—and then only prior to the press conference—that today’s drivers share a kinship with the likes of Cal Rodgers and Barney Oldfield. ds

This entry was posted on April 17, 2013 by simanaitissays in Driving it Today and tagged race driver evolution, race drivers and astronauts.