RUN IT UP THE FLAGPOLE…

THIS IS something of an unfinished book review, one that also prompts a celebration of the flagpole. The book, which I’ve just started reading, is When America First Met China. It’s a deeply researched history, but also a wonderful collection of anecdotes on everything from ginseng to the changing relationship of the U.S. and China.

When America First Met China: An Exotic History of Tea, Drugs, and Money in the Age of Sail, by Eric Jay Dolin, Liveright Publishing, 2012. Both www.amazon.com and www.abebooks.com list it.

The book’s flagpole tale dates from the very beginning of the United States. November 25 is celebrated in the state of New York as Evacuation Day, so named because in 1783 this was when the last British contingent—including some 29,000 Loyalists—left the victorious colonies. But as author Dolin notes, “before departing, they heaped one more insult upon their former colonists.”

General George Washington makes a triumphal entry into the city of New York on November 25, 1783. A print by Currier and Ives, 1857.

Fort George, at the southern tip of Manhattan, had a flagpole, not to say a number of names over the years. Originally Fort Amsterdam in 1626, it was Fort James (after England’s James II), Fort Willem Hendrick during a brief Dutch reoccupation, and finally Fort George.

The evacuating Loyalists’ final injustice in 1783 was to nail the Union Jack onto Fort George’s flagpole—and allegedly to grease the flagpole so the flag’s removal would be even more challenging. 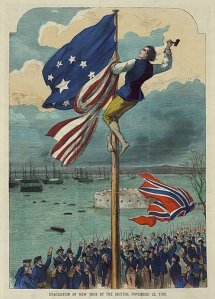 Despite a greased flagpole, the Union Jack is replaced by the Stars and Stripes, November 25, 1783. A print from 1883.

Cleats and finally a ladder allowed a young sailor to tear down the British flag and replace it with America’s colors. Shouts of joy and a thirteen-gun salute followed.

A few years later across a vast Pacific Ocean, New Zealand was the site of another flagpole tale. Maori chieftain Hone Heke, c.1807-1850, had offered this flagpole as tribute to the first British officials of Koroareka. This North Island town on the Bay of Islands was later named Russell (and in between, as a whaler’s hangout, was known as “the Hell Hole of the Pacific”).

The Treaty of Waitengi in 1840 settled matters for a while. But, with one thing and another, within five years Hone Heke felt compelled to chop down the dreaded Union Jack. The Brits erected a new one. He chopped that one down too.

In fact, Hone Heke chopped the flagpole down four successive times, the last ambush with a tactic so diversionary that it had the HMS Hazard firing on its own town and razing most of the buildings.

The British governor posted a ₤100 reward for Hone Heke’s head. Hone Heke responded by offering a matching ₤100 for the governor’s.

You gotta admire the guy. ds

This entry was posted on March 1, 2013 by simanaitissays in And Furthermore... and tagged flagpoles, Hone Heke, New York Evacuation Day, New Zealand.