WHO FIRST flew the Atlantic? A quick answer is Charles Lindbergh. His stunning achievement on May 20-21, 1927, was the first solo flight from New York to Paris. But eight years earlier, almost to the day, a flotilla of three Curtiss flying boats set out to cross the Atlantic—and, with adventures a’plenty, one of them achieved this goal.

The Navy-Curtiss NC-4 was the first aeroplane to fly across the Atlantic. This is my model of the craft for Microsoft Flight Simulator.

The NC (as in Navy-Curtiss) flying boat designed for this task was a four-engine biplane, its upper wing span 126 ft., its lower wing 94 ft. Powered by three 400-hp Liberty V-12s operating as tractors and the fourth as a pusher-prop, the NC had an empty weight of 15,874 lb. and a gross weight of 28,000 lb. To put these in perspective, a contemporary Curtiss Jenny’s wing span was just a tad less than 44 ft.; its maximum takeoff weight, 1920 lb.

The size of the NC-4 is indicated in this photo taken at Rockaway Naval Air Station on 28 April 1919. Image from “Flight of ye Good U.S. Ship NC-4,” by Clarke Van Vleet, Aviation Quarterly, First Quarter 1976, Vol. 2, No. 1, published by Airtrails, Inc. Both www.amazon.com and www.abebooks.com list it.

More than 11,000 lb. of the NC’s gross weight was gasoline, nine main tanks of 200 gal. each and a gravity-fed tank of 91 gal. Each aeroplane carried a crew of six. The commander/navigator and two pilots rode in the open cockpits; a radio operator and two flight engineers resided aft, but were able to squeeze forward between the fuel tanks to visit the other crew.

The aft hatch gave flight engineers and radio operator some ventilation from 1800 gal. of gasoline.

The flight engineers were also called upon to do wing-walking maintenance of the four Libertys.

NC-1, NC-3 and NC-4 started on May 8, 1919, from Rockaway Naval Air Station, Queens, New York, directly south of where JFK is located today. (NC-2 had earlier been cannibalized for parts.) Their flight plan was to hopscotch to Chatham, Massachusetts, and Halifax, Nova Scotia; fuel up at Trepassey Bay, Newfoundland, for the Atlantic crossing to Horta, in the Azores, and then on to Lisbon, Portugal, and Plymouth, England. 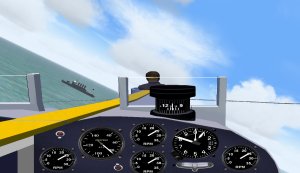 The virtual NC-4 approaches the U.S.S. Dent, one of its pearls of radio navigation strung across 1250 miles of open sea.

The U.S. Navy arranged a flotilla of 22 ships, destroyers providing short-range navigational radio telegraphy from Canada to the Azores. This was the only radio and radio-directional equipment of the era.

The first 900 miles were uneventful. Said one of the crewmen, “Our four 400-horsepower Liberty engines hummed monotonously. The destroyers passed as regularly as railroad stations.”

However, within 350 miles of the Azores, the trio got separated in heavy rain and fog. NC-1 and NC-3 were forced down onto the ocean. The crew of NC-1 was taken aboard the Greek ship Ionia; their flying boat sank in heavy seas. The NC-3’s crew kept their flying boat afloat, weathered the storm for 62 hours—and taxied 200 nautical miles (!?) to Ponta Delgada in the Azores.

First Across! The U.S. Navy’s Transatlantic Flight of 1919, by Richard K. Smith, Naval Institute Press, 1973. Included are the Radio Log and Engineering Report for the NC-4. Both www.amazon.com and www.abebooks.com list the book.

The NC-4 motors up the Tagus River in Lisbon. Image from First Across.

After three days in Lisbon, she completed her journey to Plymouth, England. Everyone came home by ship.

The Navy-Curtiss NC-4 has been restored and now resides in the National Museum of Naval Aviation, in Pensacola, Florida (www.navalaviationmuseum.org).

To close on a personal note, I visited her there on the morning of my younger daughter’s wedding day—when dads are supposed to get lost for a few hours. ds

This entry was posted on February 17, 2013 by simanaitissays in Vintage Aero and tagged first transatlantic flight, Navy-Curtiss NC-4.