NORTHERN ITALY has beautiful lakes, all thanks to glaciers carving their way south from the Alps. Maggiore, Como, even Garda are well known, but my favorite is Lago d’Orta.

About 50 miles northwest of Milan, Lago d’Orta is less than 1/10 the size of Lago Maggiore, less than 1/20 the size of Lake Tahoe. Yet it is a special little gem.  There’s a picturesque town of Romanesque and Baroque architecture, an island rid of snakes by no less than a saint—and even a modern folk legend about an environmental success. For good reason, the Milanese call the lake La Cenerentola, Cinderella.

Orta San Giulio shares its peninsula with the Sacro Monte di San Francesco, chapels dedicated to St. Francis of Assisi. Isola di San Giulio is only a short row away.

The town of Orta San Giulio, with perhaps 1200 inhabitants, lies on a peninsular promontory on the eastern bank of the lake. Its streets are tiny and pedestrian-only (except for residents with small cars that fit). Visitors park in the Piazzale Aldo Viglione and walk down Via Fontana. Soon you’re on cobblestones amidst two- and three-story buildings dating from the 1600s and earlier; the town hall was built in 1585. 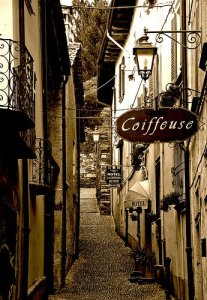 Like many of the byways in Orta San Giulio, this one is cobblestone, narrow and picturesque. Image from www.orta.net by Valentina Zanon.

I haven’t been to Orta San Giulio in a while, but hope the wonderful gelato shop on Via Olina is still there, along with La Gazza Ladra (Italian for The Magpie), a neat toy store where I’ve bought folk-art autos on several visits.

Shops, restaurants and snack bars appeal to tourists, with a charming aspect that these are also local establishments for townspeople.

Piazza Motta faces Isola di San Giulio, the lake’s only island, barely 900 ft. by 460 ft. but containing the Basilica di San Guilio, built in the 1100s, and a Seminary (now a Benedictine monastery).

Giulio (Julius to the rest of us), a priest, and his brother Giuliano (Julian), a deacon, were missionaries to northern Italy in the late fourth century. For a while, it was thought these two were one and the same, but recent archaeological work suggests they both existed. (There was also a Pope Saint Julius I living about the same time, another guy entirely.)

San Giulio d’Orta, who died circa 390, made the Isola fit for people.

It’s said the island was infested with snakes until Giulio banished them, something of an advance man to Ireland’s St. Patrick a hundred years later. In fact, I’ve given this matter a bit of research: It’s generally believed that Ireland had no snakes to begin with, and thus none to banish. But Giulio’s reputation appears untarnished.

Last, a modern tale that’s shared, though I’ve found it impossible to corroborate. It’s said that Lago d’Orta was in danger of extinction, fouled by chemicals from a mirror factory farther north on its shore. The local communes got together and persuaded the factory to mend its ways—and today, mirrors of Lago d’Orta are in its beautiful reflections. ds

This entry was posted on January 23, 2013 by simanaitissays in Just Trippin' and tagged Orta San Giulio.