A RECENT news item prompts this mini-history of the parking meter. According to the Orange County Register, January 20, 2013, Mexico City is installing parking meters in an effort to eliminate franeleros, a Mexican term deriving from franela, the Spanish word for “flannel,” slang for “rag.” 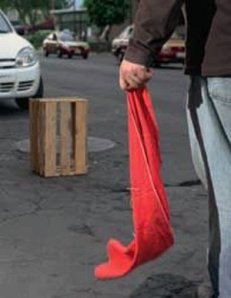 A prized parking space, once the crate is removed by the franelero.

Enterprising franeleros find open parking spaces in pre-dawn Mexico City and barricade them off with crates, water jugs and even cement blocks. Later in the day, the franelero—or franelera, women do it too—waves the franela to attract drivers seeking hard-to-find parking. The obstruction is removed and anything from 20 to 40 pesos ($1.50-$3.00) is collected.

Swapping the practice for meters is not without controversy. Some say the streets are public and shouldn’t be profit centers—for the city or entrepreneurs. Others hope to curb the lawlessness that accompanies squabbles leading to broken windshield wipers, key scars along body panels or smashed windows.

The first parking meters in the U.S., invented by a pair of engineering professors at Oklahoma State, were installed in Oklahoma City in 1935. It didn’t take long before the idea spread throughout the country.

Not only could a city derive income from its streets, but the meters also established size and orientation of the spaces. Early meters were fed nickels or pennies. With inflation, this rose to dimes or quarters. Some meters today eat only the latter. 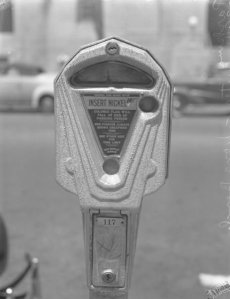 In time, parking meters switched from mechanical to digital operation. With this came an eventual acceptance of credit cards as well as coins. The latest trend is integration with smart phone technology, even to the point of the phone giving an alert when time needs to be added. 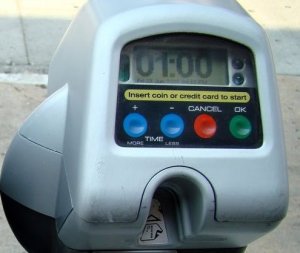 Many of today’s meters take credit cards as well as coins. The newest ones have smart phone interaction.

Another variation on pay-to-park is the multi-meter, a device monitoring 8-12 spots—or even a whole parking lot. Pay the gizmo for a chosen allotment of time, get a chit and place it on the dashboard.

I recall using clock-face cards monitoring European parking that was time-limited, though free. You’d pull into the spot, say with a 2-hour limit, and be on your honor to set your correct time of arrival on the card’s clock placed on the dashboard. (Fudge the clock setting to gain extra time? Don’t; there were random checks.)

Another personal parking observation comes from Monterey, California, during The Weekend in 2007.

Just my luck. The guy with the classic Indy roadster scored the last open spot.

In truth, the street was closed off for the RM Auctions next door to my hotel, but it sure looked like a typical case of being beat out for a primo spot.

Where’s a franelero when you need him? Or is he just a USAC fan? ds

This entry was posted on January 21, 2013 by simanaitissays in Driving it Today and tagged flaneleros, Indy roadster, Mexico City, parking meter.