A LETTER in The New York Times Book Review, January 6, 2013, reminded me of my own experience with the New England accent. What with Downeast Maine, the Northeast Kingdom of Vermont and a bunch of others, there is actually a multiplicity of these accents, but what I have in mind is English as she is practiced in refined portions of Boston and vicinity. Formally, linguists call it the Eastern New England dialect. 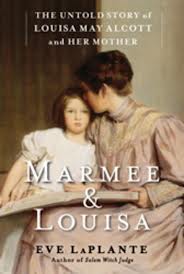 How do you suppose Louisa pronounced “Marmee”?

The letter commented on a book review of Eve LaPlante’s Marmee & Louisa: The Untold Story of Louisa May Alcott and Her Mother. In Louisa May Alcott’s book, Little Women, Marmee was the March girls’ name for their mother.

The writer, Ellen St. Sure, is an archivist of Brewster, Massachusetts, and offers a note on pronunciation of the word “Marmee.” Ms. St. Sure believes it was likely just a 19th century New England spelling of “Mommy,” with the word pronounced in the familiar way.

Her insight is welcome, as previously I would have based my knowledge on the 1945 “Theater Guild on the Air” radio production of Alcott’s Little Women, as heard on Sirius XM Radio Classics. There, the March girls, including Katharine Hepburn portraying Jo, all say something close to “Marmee,” albeit not with the hardest of “r” sounds.

Based on her experience as Brewster archivist, Ms. St. Sure’s argument is an interesting one: “The Alcott (and March) girls, New Englanders all, would have pronounced the ‘r’ as ‘ah’ when they referred to their mother.” And, in reverse usage, they would have had no problem in exchanging the “ah” for an “r” in writing.

She cites old letters and other documents that intermix “r” and “ah,” with “Mar” and “Par” making occasional written appearances. And she notes that, even in official documents, the once common first name ‘Desire’ was often written as it was evidently pronounced: ‘Desiah.’

Linguists call this non-rhoticity, the “r” sound being dropped—or at least diminished. The Brits do it too when they say “but-tah” for that yellow stuff put on toast. Like many Brits, the Eastern New England dialect has fun with vowels as well, especially a preference for the broad “a.”

The British city of Bath, for instance, rhymes with the word “moth.” In Eastern New England dialect, the word “aunt” is almost invariably said with a broad “a.” By contrast, with my Cleveland accent, it’s the same sound as those things we avoid at picnics.

Wits have suggested that Eastern New Englanders don’t completely discard these missing “r” sounds. They simply move them to the end of words in which the rest of us pronounce a final “a.”

Born and bred Bostonians might say “The tuner is a big fish,” with a gentle, almost inaudible “r.” (Things get complicated if the final “a” is followed by a consonant, but that’s another story.)

My own firsthand experience with this came during my undergraduate years at Worcester Polytechnic Institute in Worcester, Massachusetts.

Worcester Poly, my undergraduate school, is in that Masachusetts city about 45 miles west of Boston.

No credit whatsoever if, as a non-Anglophile, you give it three syllables, as in “Wor-ces-ter.” Partial credit if you pronounce it “Wo-ster.” You’d pass for a native if you say “Wo-stah.” ds

This entry was posted on January 11, 2013 by simanaitissays in I Usta be an Editor Y'Know and tagged Eastern New England dialect, Marmee, The New York Times Book Review.