THE ART OF KABUKI

KABUKI THEATER is to Japan as Shakespeare is to our culture—and more. Originating around 1600, coinciding with the Elizabethan theater of Marlowe, Jonson and Shakespeare, Kabuki continued to add repertoire well into the 1800s. These days, it’s vibrant Japanese theater that I’ve savored at Kabukiza as well as the National Theater in Tokyo and occasionally here on tour in the U.S. I’ve also accumulated some beautiful examples of Kabuki art, calendars, programs and books.

Dancing is part of Kabuki art, as shown in this program from Kabukiza Theater, October 1988.

The word Kabuki literally means the skill of dancing and singing. At the very first, it was performed by women only. From 1629, though, men played all the roles, just as in Elizabethan theater.

Like other aspects of Kabuki, these onnagata roles are highly stylized. The art of onnagata acting is said to distill the essence of femininity through theatrical illusion.

Kabuki repertory has domestic dramas (boy on one side of the river; girl on the other; no happy ending in sight) as well has grand epics based on Japanese history. I particularly enjoy the latter with actors stomping around in aragoto (“rough business”) style. 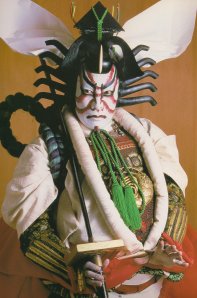 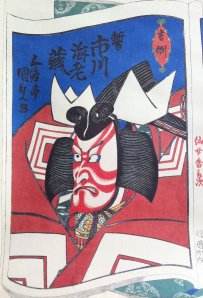 This Kabuki calendar image depicts the aragoto character shown above and below in a classic mie, a highly emotional freeze-frame.

Though plays originally ran to ten or more acts (and lasted all day), today only selected portions are played. A scene’s high point will be a mie, an emotional freeze-frame enhanced by facial expressions that are exaggerated even by Kabuki standards.

The scene is frozen in a mie at a particularly tense moment in the play Shibaraku. The guys behind the main character, also aragoto-garbed, are obviously his henchmen.

In response to this emotional high, Kabuki faithful in the audience are likely to call out the actor’s “yago,” the name of his acting house. It’s akin to an opera buff yelling “bravo!” after a thrilling aria.

Earphone-Guides, often available in Japan and the U.S., offer more than just the aural equivalent of supertitles; expert commentary is provided as well. Kabukiza has Japanese Earphone-Guides too.

Many of my visits coincided with days of “early retirement” taken directly after the Tokyo Motor Show or Japanese Grand Prix in October.

Akin to Broadway theater, the Tokyo Kabuki experience is not inexpensive. My most recent tickets were ¥15,000 (about $150 at the time), albeit for really good seats. The best I’ve had were downstairs next to the hanamichi (a stage extension jutting out into the house) and in the first row balcony (including one time when I scored a Japanese-style box immediately at stage left).

Kabukiza Theater was (and will be) a short walk from the center of Ginza, Tokyo’s upmarket shopping area. Photo by Abendstrom.

Kabukiza Theater has a relatively short history. Opened in 1889, it burned down in 1921, then was damaged in the 1923 Great Kanto Earthquake and completely gutted during World War II. Reopened in 1951, this version of Kabukiza closed in 2010. For the last months before its demolition, there was a count-down clock out in front. 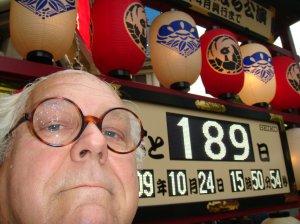 Plans are to reopen Kabukiza in April 2013, the new theater incorporated into an office tower currently under construction. Check out the construction photos (and Google translation) at www.kabuki-za.co.jp. ds

This entry was posted on January 3, 2013 by simanaitissays in And Furthermore..., Just Trippin' and tagged Kabuki theater, Kabukiza.