THE RECENT U.S. Grand Prix in Austin, Texas, reminds me of my own Formula 1 drive. (It’s difficult to work this into ordinary conversation—but it can be done.) The car was the Benetton B186. The year, as its nomenclature suggests, was 1986, Benetton’s first year as an F1 team. And this all came about because of a dinner chat with a friend, Pirelli PR guy at the time Jack Gerken.

“Why don’t we test a Formula 1 car?” I asked Jack. Wine has a way of loosening the tongue.

“Why not?” he said. And this got things rolling with Benetton and its tire supplier Pirelli.

Gerhard Berger and this B186 earned Benetton its first F1 victory, at the 1986 Mexican Grand Prix. Michael Schumacher joined the team in 1991 and began his World Championship ways in 1994 and 1995 with Benetton.

Just after the end of the 1986 season, Innes Ireland and I visited the team’s headquarters in Witney, just west of Oxford in what has come to be called England’s Motorsport Valley. We went there to be fitted to the car, Innes just fine with Teo Fabi’s custom seat, my bigger-than-the-average-bear physique accommodated by omitting any seat and padding the cockpit here and there with foam.

I fit, but that snug feeling wasn’t from the belts alone.

Next, operations moved to Silverstone Circuit where we did the actual testing. Teo drove the car for instrumented track-testing phases on one of the circuit’s connecting roads (a World War II runway). Innes ran several laps of the complete circuit, as did I before the day was out.

Silverstone had this configuration in 1986. The circuit, about 75 miles northwest of London, had been a bomber air base during World War II.

I suspected our electronic test equipment of the era wouldn’t cooperate with F1 ignition noise, so as backup we brought timing strips supported by a quarter-mile of cable. 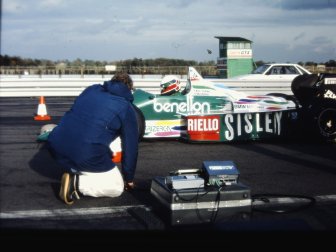 Testing the Benetton taught us interesting lessons about F1 grip and downforce.

Little did I realize that F1 tire grip and the car’s downforce would suck the strips off the tarmac. Fortunately we had backup-backup timing lights too.

The Benetton’s performance was astounding for the era: 0-175 mph in less than 10 seconds, R&T records set in everything from acceleration to braking to slalom. Curiously, because it was a turbocharged engine, it didn’t break an earlier Mazda rotary’s sound-meter record. 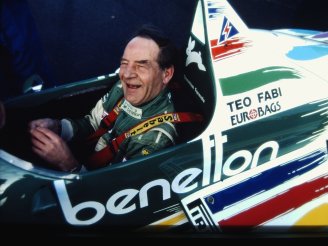 Innes was an R&T Grand Prix correspondent at the time. He had earned Team Lotus its first F1 victory, at the 1961 U.S. Grand Prix.

It took Innes only several familiarity laps to set a personal best for the circuit, this, at a place where he raced with Team Lotus in 1959-1961.

My drive was two-part. Initially I went up and down our test runway, just to get a feel for the car’s outrageous capabilities in acceleration and braking. I’m glad the runway was wide, because during one acceleration I hit a damp bit and pirouetted to a stop pointing other than the correct direction. 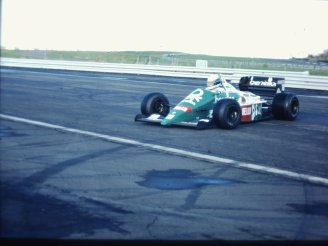 This is one of my normal turnarounds.

Then we did car-to-car photography around the whole circuit—the photo car driven by Innes, the Benetton by me. One result of this was a promotional video that ended up in Benetton clothing stores around the world.

Maybe you caught me at the local mall? I’m the one in the white helmet with blue and green striping. ds

This entry was posted on November 25, 2012 by simanaitissays in Classic Bits and tagged Benetton B186 Formula 1 car, Innes Ireland.