THIS PARTICULAR aircraft engine earns being my all-time favorite not because of its power, but through its engineering evolution, its eventual ubiquity—and its wonderfully bizarre valve gear. The engine is Glenn Curtiss’ OX-5.

Glenn Curtiss (1878-1930) was a pioneer aviator, talented engineer and one of the founders of the U.S. aircraft industry.

The OX-5 evolved in logical progression from Glenn’s initial manufacture of motorbikes. His first such effort, in 1902, was powered by a single-cylinder air-cooled powerplant of his own design. V-twins soon followed, including one in 1904 powering Tom Baldwin’s California Arrow, America’s first dirigible.

By 1907, the design had evolved into a V-8, albeit still air-cooled. Glenn earned the world speed record—land, water or air!—in taking his V-8 motorcycle across the sands of Ormond Beach, Florida, at 136.36 mph. This record wasn’t bettered in the air until 1911; no motorcycle went faster until 1930. 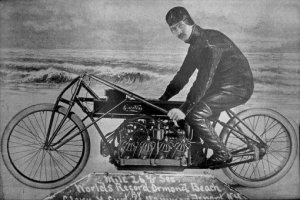 It is evident from this postcard that Glenn Curtiss was a brave man as well as a talented engineer.

The same basic V-8 design got water cooling in 1908. A crossflow head and overhead valves came in 1909. Further development gave the engine its OX-5 nomenclature and a naval aviation contract in 1912.

The OX-5 powered the Curtiss JN biplane trainers, quickly nicknamed “Jennys,” thousands of which were built during and immediately after World War I. 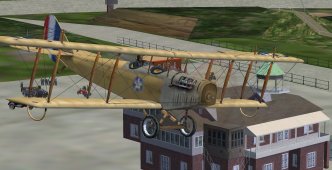 Then came a post-war flying craze largely powered by surplus OX-5s. For example, 38 percent of all aircraft licensed in 1929 had these engines, some of which had sold new in the crate for $20 (figure around $260 in today’s money).

The OX-5 is a 90-degree V-8 displacing 8.2 liters and producing a modest 90 hp. Like many of its era, the engine has individual cylinders of cast iron residing in an aluminum block.

What sets the OX-5 apart, though, is the oddity of its valve actuation. A single camshaft nestling in the vee actuates each exhaust valve conventionally through a pushrod and rocker arm. The pushrod, though, resides concentrically within a pull tube operated by the same camshaft. Each pull tube actuates its intake valve through an A-shaped rocker the base of which shares a pivot point with the lengthy exhaust-valve rocker. 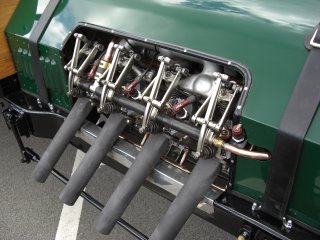 The crossflow head is evident; intake valves above, exhaust valves below. Their push-me-pull-you rocker arms share a common pivot.

The engine shown above is in a car, not an aircraft. The popularity of OX-5 powerplants encouraged many vintage race car enthusiasts to swap standard power for something rather more exciting.

This is John Dennis’ Berliet Curtiss Racer, as seen at the 2008 Brooklands Double Twelve in England.

To get a hint at what sort of excitement an OX-5 can provide, check out the video at www.youtube.com/watch?v=eDd94xowWfs. ds

This entry was posted on November 10, 2012 by simanaitissays in Vintage Aero and tagged Brooklands, Curtiss OX-5.