HOLMES OUT OF TIME

GIVEN THAT Sherlock Holmes is timeless, it’s no wonder that he and his colleague Dr. John H. Watson now and then appear anachronistically. Here are several of my favorites, decidedly non-Canonical, but good fun nonetheless.

During World War II, Universal Studios brought Holmes, Watson and the rest of Victorian England firmly into fighting the Nazis. (Purely as an aside, I always admired Sir Winston Churchill’s pronunciation of the word, “Nah-zee,” not the more generally heard “Not-sea.”)

Universal’s three films were made in unabashed support of Allied wartime efforts. In Sherlock Holmes and the Voice of Terror, 1942, Nazi propaganda was overwhelming BBC broadcasts until thwarted by Holmes. 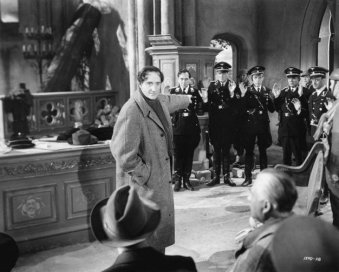 In case you wouldn’t have guessed it from their outfits, Holmes identifies the culprits in Sherlock Holmes and the Voice of Terror. Image from Universal Studios.

The movie’s theme had something of a counterpart in real life. Nazi Germany’s Lord Haw-Haw (a collective name for several propaganda voices) read wartime messages through “Germany Calling,” sent over medium- and short-wave.

The second Universal film, Sherlock Holmes and the Secret Weapon, 1943, involved a top-secret allied bomb-sighting device (think our Norden bombsight).  A secret code echoed the real Sherlock Holmes’ participation in “The Adventure of the Dancing Men.”

The third flick, Sherlock Holmes in Washington, 1943, had as its gimmick a matchbook containing the crucial microfilm. All three movies are given excellent summaries in one of Steve Miller’s fine homages to black-and-white films, http://goo.gl/dPULt. 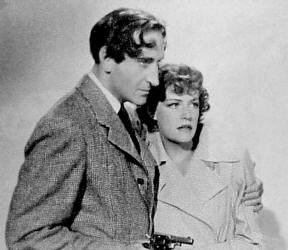 Holmes, left, is the one with the fancy do. Image from Universal Studios.

Make note of the increasingly bizarre hairdos of Basil Rathbone’s Holmes. I believe this is directly traceable to Carnaby Street. Indeed, it’s merely a 1.3-mile stroll from 221B to this three-block home of all things English and “gear.”

If we’re going to be anachronistic, let’s do it right.

Emerging as we all have into the 21st century, Holmes and Watson have done the same. The BBC’s Sherlock is very entertaining with plenty of Canonical references. 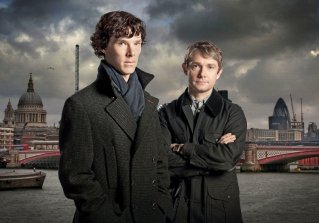 Stars of BBC’s wonderful Sherlock, Benedict Cumberbatch plays the real Holmes with proper manic dedication, Martin Freeman respects the fact that author Watson had a brain in his head.

The Sherlock plots are as intricate as those recorded in real life by Watson. Were I to have a minor quibble, co-creater Mark Gatiss is much too thin to portray Sherlock’s brother Mycroft.

Perhaps my favorite anachronistic Holmes is “The Adventure of the Misplaced Hound,” by Poul Anderson and Gordon R. Dickson. This gentle bit of sci-fi is one of 15 contained in an anthology, Sherlock Holmes Through Time and Space, edited by Isaac Asimov, Martin Harry Greenberg and Charles G. Waugh, illustrated by Tom Kidd and Richard Berry, BlueJay Books, 1984.

My favorite Holmes Out of Time is out of space as well in this neat anthology. Both Amazon.com and ABEBooks.com list it.

It’s far in the future, and the cultural mission to the planet Toka has proffered the best of Victorian England as a model. Reading everything of the era, the planet’s inhabitants, the little Hokas, take to this Big Time.

Holmes, right, and Watson have a deep Hoka love and understanding for their real counterparts as they go about solving (gentle) crime on the planet Toka.

Holmes and Watson chase the hound to the Grimpen Mire, where a sign warns “Four Miles Square Danger!!!!!!” One of the locals (who evidently knows his West Country accent) advises, “if we’d knowed the Mire were tu be zu much swink, we’d never a builted un, book or no book.”

The accent may not be completely Canonical, but the story is a delight. ds

2 comments on “HOLMES OUT OF TIME”

This entry was posted on November 7, 2012 by simanaitissays in The Game is Afoot and tagged BBC, nazis, sci-fi, Sherlock Holmes, Universal Studios.