THE AUSTIN Seven was Sir Herbert Austin’s concept of the perfect small car. As he said at its July 21, 1922, introduction, “The British working man will not stand any nonsense. It is not a fancy trade.”

And, indeed, the Austin Seven was not a fancy car—though, with due respect to Sir Herbert, it did contain some nonsense.

The Seven had four-wheel brakes, for example (something lacking on the Ford Model T during its entire 1909-1927 production). However, until late 1930, the Seven’s cable brakes were separately operated, the fronts by lever, the rears by brake pedal. What’s more, because of cable geometry, the front brakes tightened up whenever the steering probed its left or right extremes.

The Seven’s 696-cc four-cylinder engine had only two bearings supporting its crankshaft. This bare minimum persisted, even when supercharged versions more than tripled the Seven’s original 10 hp. A third bearing wasn’t added until 1937, two years before the car’s production ended.

But the story didn’t end merely in the British Isles. Sir Herbert’s Seven had children all over the world. To build the Model T, Henry Ford established his own factories in nine other countries—among them, Argentina, Norway and Japan. Instead, Austin chose to license production of the Seven—and in one case, merely to look the other way for a time.

Germany’s Dixi-Werke AG had been building a wide range of models since 1904. However, its last car, licensed from Austin, was its most successful. The 1927 Dixi 3/15PS was a Seven with minor changes in styling. When BMW, originally an aircraft engine manufacturer, bought Dixi in 1928, it continued the car as the BMW-Dixi until 1932.

The grille of this 1930 BMW-Dixi sports model certainly looks familiar. Image from The Austin Seven The Motor for the Millions 1922-1939.

The French Rosengart was built under license from 1928 to 1937. It too had styling and other modifications to suit the French public. Chris Harvey quotes a contemporary Light Car magazine opinion on the matter: “The Frenchman making a casual visit to England will tell you that the average English light car looks like a hideous square box on wheels, whilst the Englishman making a casual visit to France will tell you that the average French light car looks like a cross between a submarine and a bicycle, garnished with gimp.”

In Japan, partners surnamed Den, Aoyama and Takeuchi had called their 1914 car the Dat. In 1931 came the son of Dat, or Datson. A year later, with homage to Japan’s rising sun, their heavily Austin-Seven influenced product carried the name Datsun.

In the U.S., American Austin hoped to sell its licensed Seven as a small-car child of the depression. However, even with smart styling by Count Alexis de Sakhnoffsky, the American Austin/Bantam didn’t catch on. 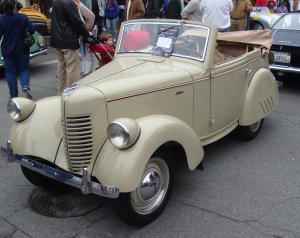 American Austin/Bantam’s small cars, though fetching in appearance, sold in only small numbers, 1930-1941.

A claim to fame for this Butler, Pennsylvania, company was its design for a U.S. Army Jeep. Willys and Ford won by default and production capabilities.

All in all, though, Sir Herbert’s global progeny did just fine, thanks. ds

This entry was posted on November 1, 2012 by simanaitissays in Classic Bits and tagged American Austin/Bantam, Austin Seven, Dat, Dixi, Rosengart.