PADDY ROY Bates passed away at the age of 91 earlier this month. You may not have known him by this name, but how about Prince Roy of Sealand? 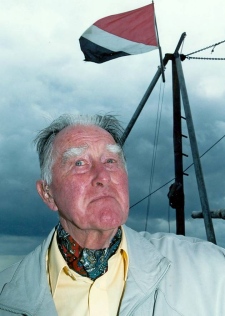 Prince Roy of the Principality of Sealand, 1921-2012; its Royal Standard in the background.

Roy Bates was larger than life. A former major in the British Army, in the 1960s he turned to setting up a pirate radio station on the fringe of British territorial waters in the North Sea.

Sealand is beyond the 3-mile limit, but well within 12 miles of the English coast. This map and other images are from lonely planet Micro Nations.

Driven farther offshore by authorities, he and his partner Ronan O’Rahilly reinstalled the station on Rough’s Tower Gun Platform, a disused military installation about the size of a baseball diamond. The two squabbled, their disagreement allegedly turning to firearms, Molotov cocktails and a flame thrower.

Bates won. Once again authorities threatened, and on September 2, 1967, he declared the place an independent country. He named it the Principality of Sealand and assumed the title Prince Roy, naming his wife Princess Joan. It was her birthday.

Not always a peaceful principality, Sealand has become a thriving center of Internet commerce.

Over the years, Sealand has been not without its drama. For instance, Bates had a run-in about firing warning shots at an approaching vessel. The principality being in international waters, the British court ruled in his favor.

The lonely planet Micro Nations guide describes another bizarre Sealand adventure: One day in 1978, a coup was attempted by the principality’s prime minister, Professor Alexander Gottfried Achenbach. The professor, a native German, together with Dutch co-conspirators had a plan to set up a casino. The Bates were away at the time, and the conspirators took their son, Prince Michael, as hostage. Prince Roy responded by freeing him in a daring helicopter raid.

The Dutch participants were released, but Achenbach, being deemed a Sealand citizen, was charged with treason. Ultimately a German diplomatic mission got involved, thus apparently establishing Sealand’s legitimacy among the world’s nations.

The Principality of Sealand; its motto, E Mare Libertas, From the Sea, Freedom.

I’m not sure that this wouldn’t conflict with our daughter’s Lithuanian title. ds

This entry was posted on October 25, 2012 by simanaitissays in Just Trippin' and tagged Paddy Roy Bates, Prince Roy, Principality of Sealand.